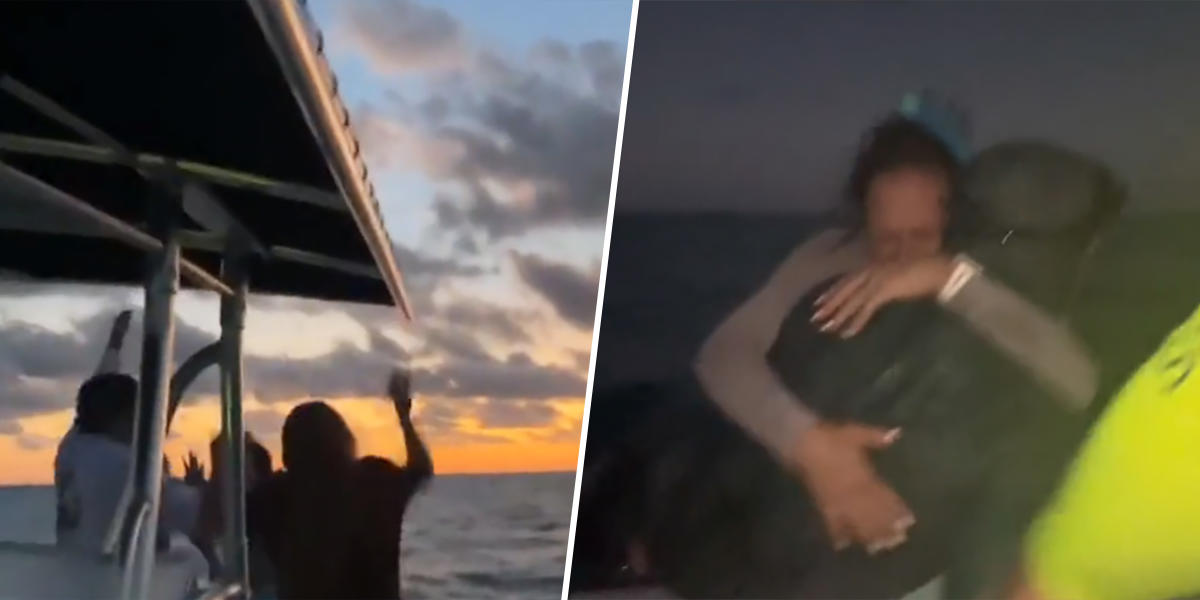 A family’s sea rescue mission to save a member of its crew who’d gone missing for hours has reeled in TikTok users and gone viral.

Three days ago, Priscilla Gartenmayer posted on TikTok a video of the moment her family spotted her missing cousin, 22-year-old Dylan Gartenmayer, floating on a makeshift raft.

Speaking to NBC affiliate WTVJ, the family says Dylan had been missing for nearly three hours.

Dylan says he can go more than 100 feet deep on a single breath underwater while free diving — forgoing the aid of a breathing apparatus like scuba gear. As weather conditions blustered, Dylan and the two friends he’d been on the boat with decided to head back. Still, the temptation to squeeze in one more splash won out, and as Dylan put it, “that’s where everything started happening.”

Dylan was in a free dive at almost 35 feet when the Gulf Stream current drew him out of waters that were nearly 150 feet. For about two minutes, Dylan says he remained underwater, holding his breath.

“So that’s how I ended up getting separated,” he explained. “…They were mainly looking down, thinking I blacked out from a lack of oxygen.”

When he resurfaced, Dylan says he found that he was nearly an entire mile away from his original diving spot and swam more than a mile to reach a channel marker.

“I had a bunch of bait floating up around me and everything,” Dylan noted. “I knew that there were big fish eating those baits, and there were sharks that were going to be shortly behind them. I was ready to fight the night out, but I’m glad I didn’t have to.”

At the same time, his family — who has lived and spearfished in the Key West area for generations — had already set out to find him.

Dylan’s mother, Tabitha Gartenmayer, learned about his missing status over the phone.

“And we get the call from my ex-husband,” said Tabitha. “‘Tab, something’s wrong with Dylan. They haven’t seen him in an hour.’ And from that moment on, this feeling came over me, just like this, and I couldn’t breathe. I couldn’t talk.”

Immediately she launched a mission to find Dylan. A neighbor’s surveillance video shows the moment the Gartenmayer family sped off down the canal and to the ocean in search of her son.

“(Tabitha) was very much insisting, drop that boat right now,” Jamie Cooke, a friend of the Gartenmayer family, explained to WTVJ.

By that time, the U.S. Coast Guard was deep into their search for Dylan and had sent out helicopters and boats to save him, so the Gartenmayer crew opted to head to the last place he’d been seen.

Eventually, it was Joel, a friend of Dylan’s, that spotted his makeshift raft of tied-together mooring balls.

Dylan had, by then, seen the Coast Guard in the distance conducting their grid-pattern search to find him and heard the sound of a boat coming up from behind him.

Dylan’s cousin Priscilla’s other TikTok videos capture the moment the boat (loaded with his family and friends) gets to him and pulls him on board.

According to Priscilla’s TikTok, soon after her family pulled Dylan from the water, the Coast Guard took him to their station and checked his vitals.

“That was really emotional for me,” Priscilla said of seeing him be pulled on board. “So, you know, we know how lucky we are to have so still have Dylan here.”

“The Coast Guard is grateful to know that Mr. Gartenmayer was found safe,” she said. “Thanks to the coordinated search efforts of Coast Guard Sector Key West watchstanders and Mr. Gartenmayer’s family, this case resulted in a positive outcome. Too often, missing diver cases don’t have positive outcomes, and the circumstances of this case didn’t forecast for one. Sunset, weather conditions and Dylan’s outfit were playing against us in this case, but his foresight to lash mooring balls together to make him a bigger target in the water was smart.”

Tatum added that the most significant piece of advice that they can offer to the public is that the SAR system worked as intended.

“We broadcast Urgent Marine Information Broadcasts to notify the public that an emergency exists,” she added. “The CG doesn’t care who conducts the rescue as long as the person is rescued.”

The relief of knowing Dylan survived has since spilled over to TikTok, where users have praised the family for their fast-acting and speedy recovery.

“This low-key made me cry, lol,” one user wrote. “Imagine getting lost alone out at sea, then you just see your family pulling up shouting your name.”