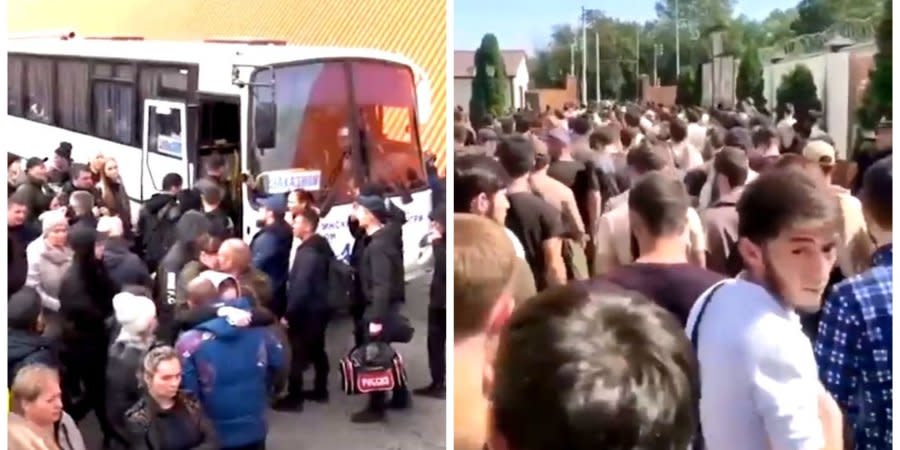 One video, reportedly taken in Yakutia, shows the management of local companies summoning their workers and loading them onto buses head-ing to recruitment offices.

On Sept. 21, Putin declared a “partial mobilization” in Russia, and espoused his readiness to use nuclear weapons in the event of a “threat to the territorial integrity” of Russia.

Russian Defense Minister Sergei Shoigu, in a later address, announced that 300,000 reservists would be called up during the partial mobilization.

After that, Russians rushed to buy tickets to other countries en masse to avoid being called up for the war in Ukraine.

Meanwhile, the counter-offensive of the Ukrainian army on several parts of the front continues.

The Ukrainian Armed Forces have kept the strategic Antonivsky Bridge and other crossings across the Dnipro River in Kherson Oblast under fire control, thereby preventing Russian troops from restoring critical supply routes.

As Ukrainian forces block the reinforcement of Russian units in the region, the capabilities of the Russian Armed Forces there have been severely diminished.

In addition to Kherson Oblast, an active counteroffensive also kicked off in Kharkiv Oblast on Sept. 6.

And while the General Staff of the Armed Forces of Ukraine has refrained from commenting on updates regarding the liberation of Kherson, over 8,000 square kilometers has already been liberated in Kharkiv Oblast.

Additionally, Ukrainian partisans continue to eliminate pro-Kremlin collab-orators who have voluntarily agreed to work for the invading Russian forces.