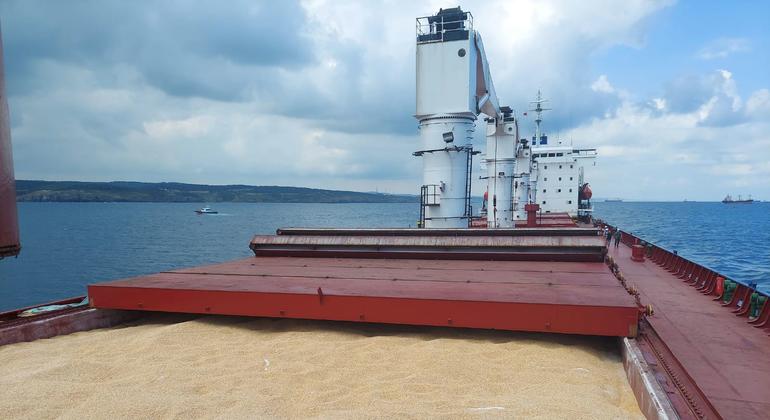 In line with the UN-partnered Black Sea Grain Initiative that was facilitated by the Secretary-General on 22 July, the crew of the merchant vessel Razoni and its 26,000-tonne cargo of Ukrainian corn underwent checks lasting three hours.

A joint inspection team from 🇷🇺 🇹🇷 🇺🇦 and the @UN 🇺🇳is checking first shipment of over 26,000 tons of Ukrainian corn🌽under a Black Sea export deal today. Once cleared, it can sail to its final destination, #Lebanon pic.twitter.com/PqILMeqqlv

The Sierra Leone-flagged ship arrived in Istanbul’s waters on Tuesday evening, after sailing from Ukraine’s main Black Sea port of Odesa on Monday.

Food for the world

“This marks the conclusion of an initial ‘proof of concept’ operation”, the statement continued, adding that three ports in Ukraine were due to resume the export of millions of tonnes of wheat, corn and other crops “at a time of global food insecurity”.

In addition to shipping millions of tonnes of food from Ukraine, the initiative also envisages the export of fertilizer needed by the world’s farmers, “under close monitoring”, the Joint Coordination Centre statement explained.

It noted that the inspectors had spoken to the Razoni’s crew and gained “valuable information” about the vessel’s journey along the maritime humanitarian corridor in the Black Sea that was agreed by the signatories of the Black Sea Grain Initiative.

“The JCC will use this voyage in its ongoing work on fine-tuning procedures and processes to enable the continuation of safe passage of commercial vessels across the Black Sea under the Initiative.”

In a related development, the head of the UN nuclear watchdog, the IAEA, warned that war in Ukraine was “threatening one of the world’s biggest nuclear power programmes”.

At a press briefing in Vienna, Rafael Mariano Grossi, IAEA Director General, points to the Zaporizhzhia Nuclear Power Plant in Ukraine on a map., by © IAEA/Dean Calma

Addressing the Non-Proliferation Treaty Review Conference at the UN in New York on Tuesday, head of the International Atomic Energy Agency, Rafael Grossi, said the IAEA’s seven indispensable pillars of nuclear safety and security, were being violated.

The situation is particularly worrying at Zaporizhzhya Nuclear Power Plant in the southeastern city of Enerhodar. The plant has been occupied and reportedly used as a military base by Russian forces since March.

“While this war rages on, inaction is unconscionable,” Mr. Grossi said. “If an accident occurs at the Zaporizhzhya Nuclear Power Plant, we will not have a natural disaster to blame. We will have only ourselves to answer to,” the IAEA chief added, before calling for access for an IAEA team of experts and inspectors.

UNHCR, reported on Tuesday that more than 10 million people from Ukraine have crossed their country’s borders seeking shelter in neighbouring countries.

Latest data from the UN agency’s displacement portal indicated there have been 10,350,489 border crossings from Ukraine since 24 February this year, with more than 4.2 million journeys back into Ukraine since the end of that month.

Amid ongoing fighting, UNHCR noted that many more people have been forced to flee their homes inside Ukraine – and that they continue need protection and support.

WHO warns of disease threat amid Horn of Africa drought |