TikTok captures an angry mob booing a tourist who climbed a protected Mayan pyramid in Mexico: ‘lock her up’ 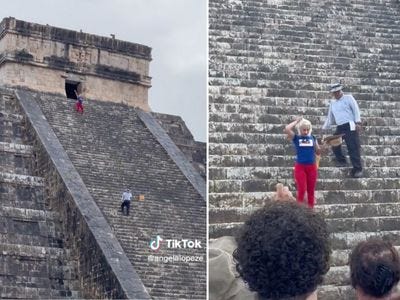 Footage of a woman climbing the steps of a protected Mayan pyramid in Mexico as a crowd of people call her out has blown up online, with many viewers accusing her of being disrespectful.

One version of the clip, which was uploaded by TikTok user @angelalopeze on November 21 and has received 3.7 million views, shows an unidentified woman scaling the steps of the Chichén Itzá, also known as El Castillo, a historical Mayan site in Yucatán, Mexico, that’s been declared a UNESCO world heritage site.

The woman can be seen walking up the pyramid and dancing on the steps. She is followed by what appears to be a member of security who gestures for her to come down.

A gathering crowd can be heard shouting at the woman as she makes her way down the steps. At the bottom, she’s met by a throng of people who boo her and throw water in her direction as she’s escorted away. The chants from the crowd, mostly in Spanish, include, “out,” “lock her up,” and “jail!”

The caption on the TikTok video reads, “this is so disrespectful… don’t mess with my Mexican people.” Many of the top comments appeared to agree, while others highlighted the safety risks involved in the climb.

One comment with over 8,000 likes said, “I don’t understand why they want to climb it. It’s so steep, and it’s historical. I mean one mistake and they’re tumbling to their death.”

Another video of the incident posted on Twitter which has over 7.1 million views shows the woman being led through the crowd of people throwing bottles in her direction, and one person can be seen grabbing her hair.

While tourists used to be able to climb the pyramid, Mexico’s National Institute of Anthropology and History (INAH) has prohibited visitors from climbing the monuments since 2008. According to Mexico’s federal law on archaeological, artistic, and historic monuments and areas, anyone who violates or desecrates such areas is subject to a sanction and a fine of up to 50,000 pesos ($2,572.97).

A statement provided to Insider by Mexico’s National Institute of Anthropology and History confirmed the woman, identified as a tourist, “breached the ban to access the steps of El Castillo, affecting the operation of the site.”

“The Ministry of Culture and the INAH call on the general public to respect the provisions established for public visits to archaeological zones and historical sites, which are determined to guarantee a safe and enjoyable experience,” the statement continued. “As well as to guarantee the conservation of heritage sites.”

It added that the incident had been transferred to the Yucatán public safety authorities.

Local law enforcement in Yucatán did not immediately respond to Insider’s request for comment.

For more stories like this, check out coverage from Insider’s Digital Culture team here.