The true story behind Thanksgiving is a bloody one, and some people say it’s time to cancel the holiday 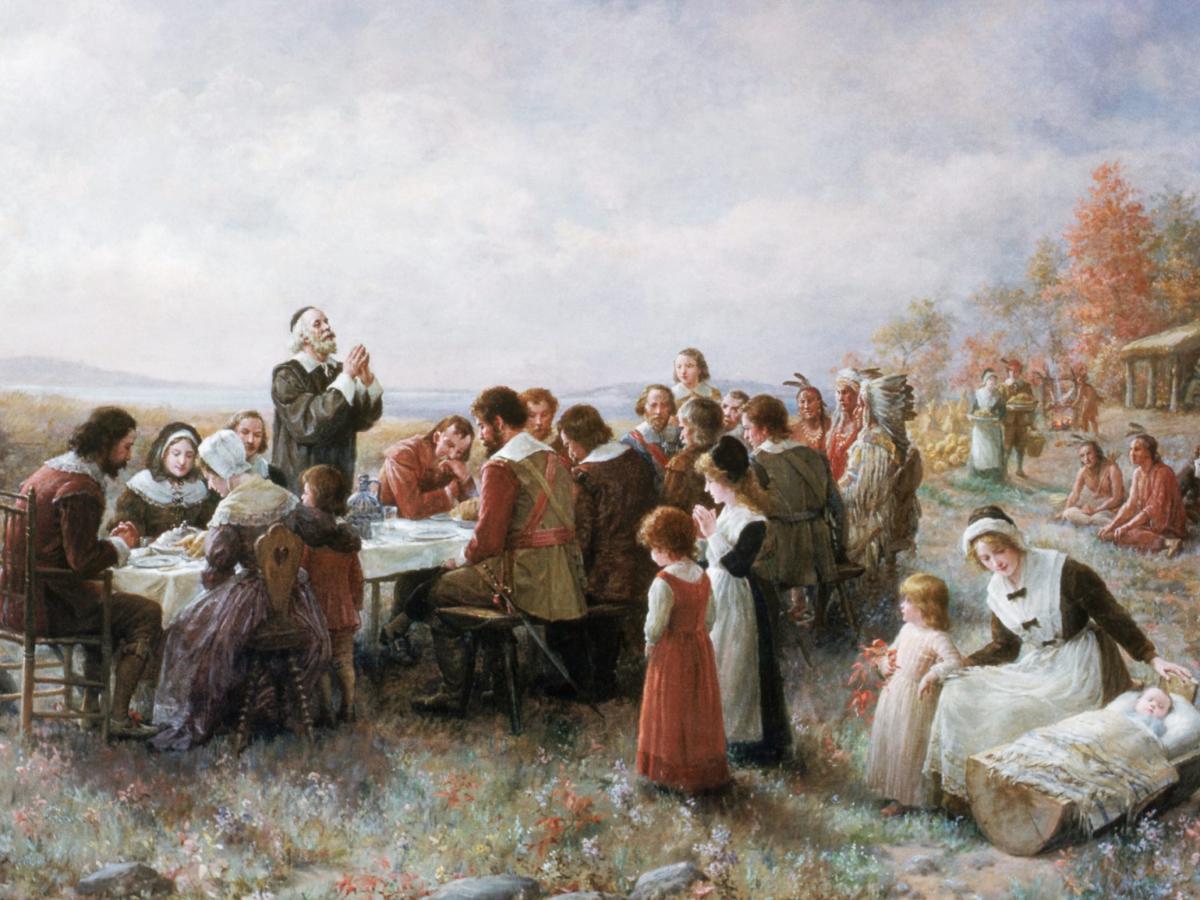 Thanksgiving in the US is traditionally a time for family and food.

American schoolchildren typically learn that the tradition dates back to the Pilgrims, who helped establish Plymouth Colony in 1620 in what is now Massachusetts.

As the story goes, friendly Native Americans taught the struggling colonists how to survive in what the Europeans called the New World. Then everyone got together to celebrate with a feast in 1621.

Thanksgiving 2022 would mark the 401st anniversary of that “first” American Thanksgiving. But, in reality, Thanksgiving feasts predate Plymouth, and the peace celebrated that day was tenuous.

The real story behind the holiday is so dark, in fact, that some people are rethinking how they celebrate the holiday, or whether they should at all.

The Plymouth Thanksgiving of 1621 wasn’t the first

Settlers in Berkeley Hundred, in what is now Virginia, celebrated their arrival with a Thanksgiving as far back as 1619, according to National Geographic. But the The Washingtonian reported the meal was probably little more than some oysters and ham thrown together.

Decades before that, Spanish settlers and members of the Seloy tribe broke bread in Florida with salted pork, garbanzo beans, and a Mass in 1565, according to the National Parks Service.

Our modern definition of Thanksgiving revolves around eating turkey, but this was more of an occasion for religious observance in past centuries. The Pilgrims would most likely consider their sober 1623 day of prayer the first actual Thanksgiving, according to the History of Massachusetts Blog.

Others pinpoint 1637 as the true origin of Thanksgiving, since the Massachusetts Bay Colony’s governor, John Winthrop, declared a day to celebrate colonial soldiers who had just slaughtered hundreds of Pequot men, women, and children in what is now Mystic, Connecticut.

Regardless, the popular telling of the initial harvest festival is what lived on, thanks to Abraham Lincoln.

The enduring holiday has also nearly erased from our collective memory what happened between the Wampanoag and the English just one generation later.

Massasoit, the Wampanoag paramount chief, allied with the English settlers after Plymouth was established and fought with the newcomers against the French and other local tribes. But the alliance became strained over time.

As thousands more English colonists moved to Plymouth, taking over more land, authorities asserted control over “most aspects of Wampanoag life,” according to the book “Historic Contact: Indian People and Colonists in Today’s Northeastern United States.”

A study published in the journal Quaternary Science Reviews estimated that disease had already reduced the New England Indigenous population by 90% by 1620. The Wampanoag continued to die from what the colonists called “Indian fever,” an unknown disease brought by early European settlers.

By the time Massasoit’s son, Metacomet — who was known to the English as “King Philip” — inherited leadership, relations had frayed. His men were executed for the murder of the Punkapoag interpreter and Christian convert John Sassamon, sparking King Philip’s War.

Wampanoag warriors responded with raids, and the New England Confederation of Colonies declared war in 1675. The war was bloody and devastating.

In an article published in the Historical Journal of Massachusetts, the Montclair State University professor Robert E. Cray Jr. said the death toll could have been up to 30% of the English population and half of the Native Americans in New England.

Metacomet was beheaded and dismembered, according to “It Happened in Rhode Island,” and the colonists impaled his head on a spike to display for 25 years.

The war was just one of a series of brutal but dimly remembered early conflicts between Native Americans and colonists in New England, New York, and Virginia.

The holiday’s dark past has some people rethinking Thanksgiving

The focus on racial justice in the US has some people saying that reevaluating the meaning and celebration of Thanksgiving is long overdue.

Teachers, professors, and Native Americans told The New York Times in 2020 that they were rethinking the holiday that has marginalized the US’s violence and cruelty against Native Americans, giving it names like “Takesgiving” and “The Thanksgiving Massacre.”

And reflections on Thanksgiving are not new. According to the New York Post, the United American Indians of New England have been publicly mourning on Thanksgiving for decades.

Frank James, an Aquinnah Wampanoag activist who helped establish a National Day of Mourning in 1970, called the Wampanoag’s welcoming of the English settlers “perhaps our biggest mistake,” The Washington Post reported.

On the National Day of Mourning, Native Americans gather in Plymouth, Massachusetts, for a day of remembrance for the millions of Indigenous people who were killed by European colonists. Prayers and speeches take place accompanied by beating drums before participants march through the Plymouth Historic District.

“Participants in National Day of Mourning honor Native ancestors and the struggles of Native peoples to survive today,” the commemorating plaque at Cole’s Hill in Plymouth says, in part. “It is a day of remembrance and spiritual connection as well as a protest of the racism and oppression which Native Americans continue to experience.”