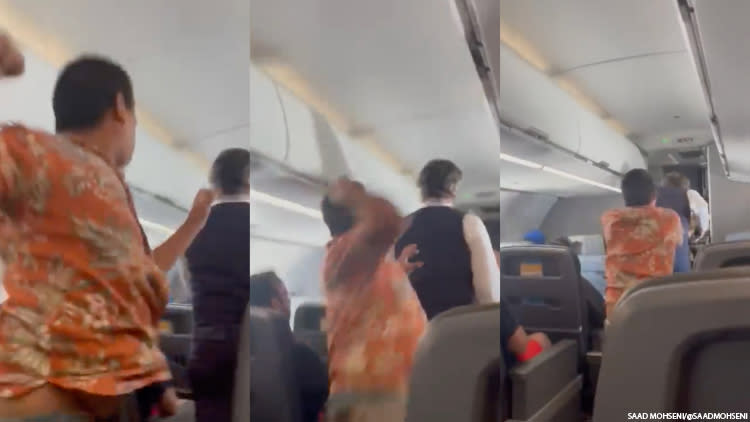 Shocking video posted to social media showed the moments a man punched a defenseless flight attendant in the back of the head on a flight from Mexico yesterday.

The attack took place yesterday on American Airlines flight AA377 from Los Cabos, Mexico to Los Angeles International Airport in California. According to a report from CBS News, the man was upset he had been refused access to the first class bathroom.

In the video shot by a passenger, a flight attendant is standing in the aisle, blocking the man from entering the first class section of the plane.

The flight attendant then appears to flinch, as if the other man had made a threatening motion.

“Okay, that’s enough,” the flight attendant says, turning away from the man and walking up the aisle towards the front of the cabin. At this point, the unnamed man raises his fist and charges the unsuspecting flight attendant. The man connects one solid punch to the back of the flight attendant’s head before backing away quickly.

A subsequent video showed the same man seated with a flight attendant securing his wrists with zip ties while a male passenger stands watching from a very close distance.

The unnamed man was arrested upon landing in Los Angeles.

“American Airlines flight 377 with service from San José del Cabo (SJD) to Los Angeles (LAX) was met by law enforcement upon arrival due to an unruly passenger who physically assaulted a flight attendant,” the company said in a press release quoted by CBS News. “The aircraft landed safely and taxied to the gate where law enforcement removed the individual.”

A source from the FBI told CBS News they were hoping to bring charges as soon as today. No word on whether the man was able to use a restroom in time.