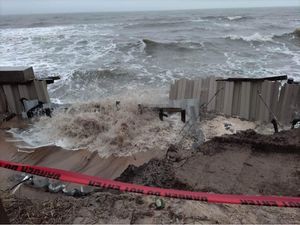 Action News Jax was able to take a closer look at a seawall that is falling apart in South Ponte Vedra Beach, and how it’s threatening a row of homes already on the brink of major destruction.

Neighbor Joe Solcz who spoke with Action News Jax said sand dunes from a renourishment project used to be as high as his concrete seawall, but now they’re all gone.

The tide can also be seen ripping into a portion of seawall a few doors down, as contractors work to save the homes behind it.

“Repairs are being done but you know, it’s been a losing battle for the past few days,” Solcz said.

A few doors down from Solcz, the ocean seems to have the upper hand. Powerful waves have breached a seawall, and they threaten even more damage. “The guys are saving the house [behind the breach] right now,” he pointed out.

Our Action News Jax First Alert Weather Team says a weather pattern known as a local Nor’easter brought moderately strong winds, and normally it wouldn’t be a big deal but after Ian and Nicole, the coast is reeling.

“It’s been a big pit in our stomach,” Solcz said of the uncertainty. He has been in Ponte Vedra since 2016 and after Hurricane Matthew, he had to rebuild his seawall.

“[We got] a great, high-quality wall that was deep,” he emphasized. “How much was it?” asked Action News Jax reporter Jessica Barreto. “It was about 175 [thousand dollars], and then we had to fill it in with dirt,” he explained.

Even with this barrier, he wonders what a direct impact from a hurricane or storm would look like.

“These [storms] are all skirting us and it’s been pretty rough,” Solcz shared.

So even after that investment, he says if his next-door neighbors don’t agree on a sturdier seawall, he’ll likely be forced to move away and sell his dream home.

“I think somebody will like it because it’s built the right way,” he reassured.

“There’s probably no extremely long-term solution, but I think one continuous well-built seawall that’s very deep will help those houses last another decade or so, I don’t know,” he added.

Our Action News Jax First Alert Weather Team says high surf in the area will also continue through the weekend.