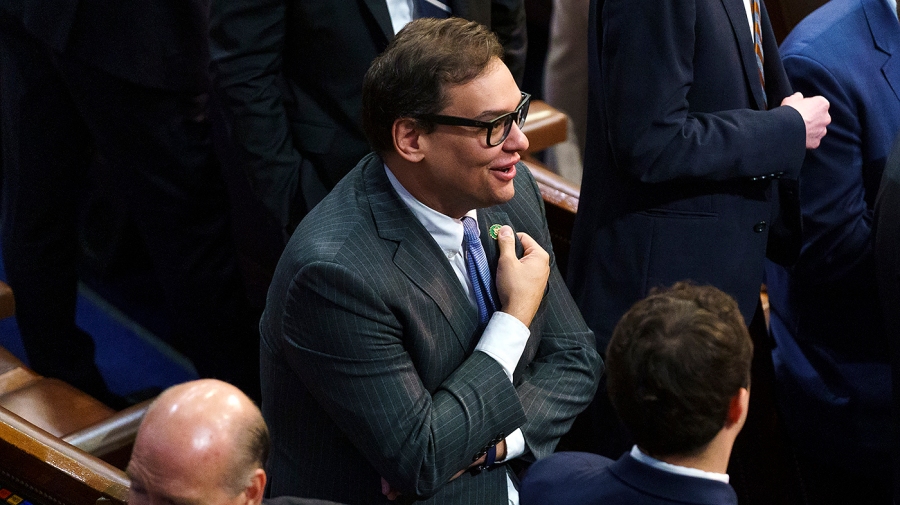 The controversies swirling around Rep. George Santos (R-N.Y.) are shifting quickly from resume lies to questionable finances, posing a much more serious threat to the embattled freshman even as he vows to remain in Congress.

While the early cloud of scandal had focused on the ethics of Santos’s fabricated campaign biography, more serious revelations suggest the Long Island Republican might have violated campaign finance laws — a much graver class of misconduct that could result in civil penalties, criminal prosecution, expulsion from Congress or all three.

The questions center around the hundreds of thousands of dollars Santos has loaned his campaigns from personal accounts; his sharp increase in reported wealth; an outside group that was raising funds on behalf of his campaign, without being registered with the Federal Election Commission (FEC); and a host of expenses submitted by his campaign for $199.99 — one cent less than the figure requiring receipts.

“We certainly are talking about potential FEC investigations and DOJ investigations,” said Robert Maguire, research director with Citizens for Responsibility and Ethics in Washington.

The saga has become a distraction for Republican leaders, who are newly empowered with control of the House and are hoping to focus the public’s attention on the Biden administration, particularly the recent discovery of classified documents at Biden’s home and former office.

While GOP leaders have seated Santos on a pair of committees — and are quick to defend his right to remain in Congress after a fair election — some Republicans have called for his resignation. Most others are distancing themselves, warning that if Santos is found to have violated campaign finance laws, he should be booted from Congress.

Local and federal investigators are reportedly looking into Santos’s finances, and he also faces multiple ethics and campaign finance complaints.

Santos’s public filings show a spike in personal wealth between his 2020 and 2022 campaigns, coinciding with the creation of his company, the Devolder Organization LLC, and at least $705,000 in personal loans to his 2022 campaign and more than $80,000 during his 2020 run.

A financial disclosure form in 2020 said he made $55,000 from LinkBridge Investors during the previous year, and listed no other assets, income or liabilities.

Santos formed Devolder in May 2021, according to documents filed with the Florida secretary of state. His campaign website previously said that his company managed $80 million in assets, but that claim has since been removed. The Washington Post reported that financial data company Dun & Bradstreet estimated in July 2022 that the company had revenue of only $43,688.

Santos told radio station WABC and then the Daily Beast that he withdrew money from his company as his salary, then used it to fund his campaign.

The Devolder Organization was in the “capital introduction” business, Santos told Semafor in December, similar to the company where he previously worked, LinkBridge.

Santos said he would then connect people to wealthy investors and institutions, and “landed a couple of million-dollar contracts” in the first six months.

Santos has confirmed little else about the specifics of how his company made money, though some public reports have identified a few clients.

Santos told the Daily Beast in December that the Devolder Organization contracted with Acrisure, the parent company of The Whitmore Group insurance brokerage. The Whitmore Group’s CEO, James Metzger, is a major GOP donor and also contributed to Santos’s campaign.

The Devolder company was one of several organizations authorized to manage and control Red Strategies USA — separate from Redstone Strategies — according to documents reported in a Campaign Legal Center FEC complaint against Santos. FEC reports show just one political committee payingRed Strategies USA: Tina Forte for Congress, the Republican candidate who challenged Rep. Alexandria Ocasio-Cortez (D-N.Y.). It is unclear how much, if any, of the $1110,320 paid from the Forte campaign ultimately went to Devolder.

Santos previously worked at Harbor City Capital, which the Securities and Exchange Commission (SEC) said was a Ponzi scheme and was shuttered in 2021. Santos was not charged with a crime in connection to that SEC case and has denied knowledge of alleged wrongdoing.

The origin of Santos’s newfound wealth has intrigued legal and political experts for another reason: It fueled the large loans he made to his campaign.

Rep. Matt Gaetz (R-Fla.) asked Santos where the money for his campaign loans came from in a recent interview on the “War Room” podcast.

“I’ll tell you what. It didn’t come from China, Ukraine, or Burisma, how about that?” Santos said, deflecting the question while taking aim at business dealings by President Biden’s son, Hunter Biden.

Richard Briffault, a Columbia Law School professor specializing in campaign finance, said those loans may be the most consequential piece of the Santos puzzle, from a criminal justice standpoint, if they are found to have been “an illegal means of disguising illegal contributions.”

“If it turns out that that was a device for donors to funnel money to the campaign, that itself is illegal — Santos would be a ‘straw donor’ falsely claiming he provided the money when it really came from someone else,” Briffault said Friday in an email.

The seriousness of the infraction would worsen if those donations exceeded the legal limit of $2,900 per donor in any one cycle, Briffault added. And the gravity would compound further if the donors were found to be corporations or foreign entities.

“And if Santos ‘knowingly’ participated in this, we are talking about a felony,” Briffault said.

The Campaign Legal Center, a nonprofit government watchdog, raised similar concerns in a complaint filed this month with the FEC, in which it accused Santos of concealing the “true sources” of the $705,000 he loaned his campaign and using campaign funds for personal expenses, both in violation of federal law.

The group also said that, if Santos diverted funds from his company to himself in order to make personal loans to his campaign, the loans could be considered prohibited corporate contributions.

Other campaign finance and ethics issues

Aside from the sharp rise in Santos’s wealth creating questions about how he made that money, how he reported and used the funds in relation to his campaign could get him in legal trouble.

House Ethics Committee rules say that candidates and new members must disclose any clients that paid more than $5,000 for services that the candidate or member personally performed. Santos did not list any clients on his financial disclosure, an issue noted by New York Reps. Ritchie Torres (D) and Dan Goldman (D) in a complaint they filed with the committee.