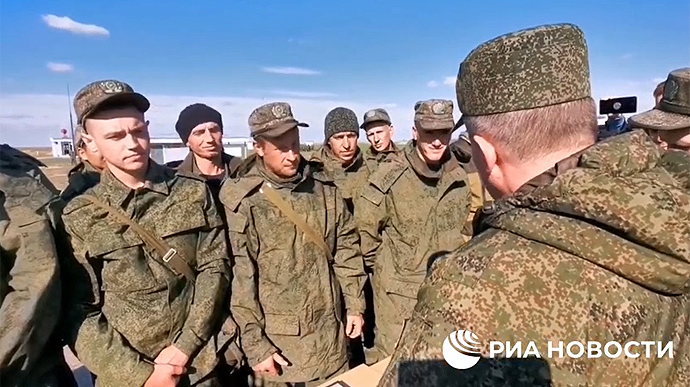 In Luhansk Oblast, conscripts fighting on the side of the Russian Federation are given uniforms belonging to dead or wounded soldiers; they find personal belongings of the uniforms’ previous owners in their pockets. Meanwhile, uniforms and personal equipment sent to the occupied territories of Ukraine from Russia can be found for sale at local markets.

Quote: “Equipment that is being sent to the so-called ‘Luhansk People’s Republic’ [an illegal, self-proclaimed formation on the territory of Ukraine’s Luhansk Oblast – ed.] can be purchased at local markets.

Forcibly conscripted citizens are given uniforms that have personal belongings of their previous owners, dead or heavily wounded soldiers, in their pockets.”

Details: The oblast military administration also reported that the situation in the cities temporarily occupied by Russian forces is difficult. In Rubizhne, for example, local residents are forced to repair their roofs and windows themselves; the city has no power or running water.

The situation is even worse in smaller towns and villages in the vicinity of the front that remain under Russian occupation. For instance, there is no running water, heat or power in Novokrasnianka near Kreminna. The villagers also have no access to food, whether for sale or humanitarian aid. The village has not seen any food deliveries in a long time.

Luhansk Oblast Military Administration has reported that local residents are eagerly awaiting the arrival of the Ukrainian Armed Forces.

Russian forces are defending their current positions on the Kupiansk and Lyman fronts and deploying tank guns, mortars and tubed artillery to fire on areas in and around Novoselivske, Ploshchanka, Stelmakhivka and Makiivka.

Ukraine’s aircraft have carried out an air strike on a cluster of Russian personnel, weapons and equipment in the past 24 hours.

Meanwhile, Ukraine’s Rocket Forces and Artillery have struck a Russian command post, a fuel and lubricants storage point, a cluster of Russian military personnel, weapons and equipment, and an electronic warfare system.