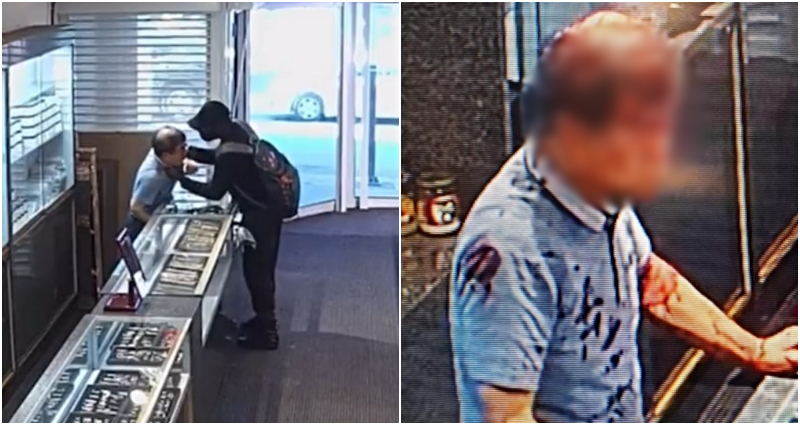 A repeat offender accused of pistol-whipping, hammering and stomping on a jewelry store owner in Wilmington, Delaware, in September was indicted on seven charges on Monday.

Calvin Ushery Jr., 39, was arrested a week after the brutal attack against the Korean American owner of Solid Gold Jewelers on West 9th Street on the morning of Sept. 15.

Security footage of the incident shows a masked man grabbing the 68-year-old store owner, pulling out a gun and pistol-whipping him in the head.

As the helpless victim falls to the ground, the assailant jumps over the display case and repeatedly stomps on his head.

More from NextShark: Chinese man, 80, sues his adult son for $15,000 for mocking him after he failed a math quiz

Reports say the suspect also repeatedly bashed the victim’s head with a hammer. After the vicious assault, he allegedly swiped items on display worth an estimated $100,000.

If proven guilty, Ushery faces eight to 107 years in prison. In a statement, Delaware Attorney General Kathy Jennings said the victim and his family deserve “full justice under the law.”

“This assault was brutal, cowardly, and deeply disturbing. These are major felonies with severe consequences,” Jennings said. “We never choose these charges lightly — but they are completely appropriate under the facts. At 68 years old, the victim was not only robbed of his livelihood but viciously attacked with a deadly weapon and hospitalized with devastating injuries.”

The victim has since been on the road to recovery. His son, Steve Suh, set up a fundraiser on GoFundMe for his medical bills and retirement.

“[Ushery] has a lengthy criminal past and should not be on the streets, where he can terrorize elderly business owners ever again,” Suh said at a press conference last month. “We don’t want any other family to experience what we are going through.”