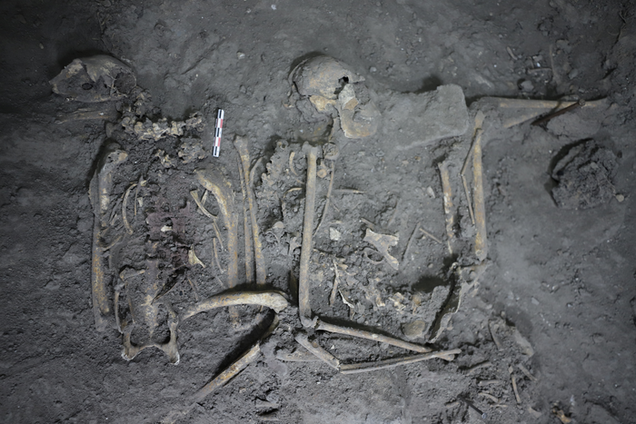 Archaeologists working on the Plaza of Columns Complex site at Teotihuacán have made a surprising discovery in the ancient Maya capital: the remains of a 1,700-year-old spider monkey, which the archaeologists suspect was once a state gift between elites.

The Plaza of Columns sits between the Sun and Moon pyramids at Teotihuacán, the ancient seat of Mesoamerican power. As far as the urban planning of Teotihuacán goes, the plaza is prime real estate, and the objects found in the area are associated with Maya elites—perhaps even governing individuals.

The monkey is a Geoffroy’s spider monkey (Ateles geoffroyi), or the black-handed spider monkey. Now endangered, the animal is not native to the high elevations of Teotihuacán.

The monkey’s remains were found alongside thousands of mural fragments and ceramic sherds, as well as the remains of several other animals: a golden eagle, several rattlesnakes, and snail artifacts. The research describing the simian find was published this week in the Proceedings of the National Academy of Sciences.

In 378 CE, warriors from Teotihuacán arrived in Tikal, a Maya city in modern Guatemala. It was an early exchange between cultural elites of Mesoamerica, and the event is generally seen as a shift in political control in the region, in Teotihuacán’s favor. But the spider monkey—a gift from the Maya to elites in the capital—predates that event, indicating that the diplomatic ties between the two groups were more equal (or at least more cordial) before 378.

“The fact that the Maya chose a spider monkey, as opposed to say a jaguar, as a gift is telling of how they wanted the Teotihuacanos to view them,” said Nawa Sugiyama, an archaeologist at UC Riverside and the lead author of the research, in an email to Gizmodo.

A Geoffroy’s spider monkey at the Belize Zoo.

Excavations on the site also turned up valuables and handmade crafts, like jade figurines, obsidian blades, and projectile points. Yet it was the monkey that really caught archaeologists’ eyes.

“Apex predators like the jaguar, puma, wolf, golden eagle, and rattlesnake were sacrificed at Teotihuacan as emblems of the Teotihuacan state,” Sugiyama said. “Unlike these predators that convey symbols of militarism, domination, and power, the spider monkey is a charismatic animal associated with scribes, artisans, and playfulness.”

Using a swath of evidence (from ancient DNA, isotopes from the monkey’s teeth, and paleobotanical evidence in the soil around the animal), the team determined that the female monkey was between five and eight years old when it died.

Its teeth indicated that the monkey spent about two years in captivity and ate maize and chili peppers (among other foodstuffs) in Teotihuacán. Before that, the animal lived in a humid environment (presumably the rainforest) and ate plants and roots.

From the bones, the archaeological team was able to resurrect a stunningly vivid life history of the animal, from its days in the wild to its evident capture and death.

Though archaeologists can’t be certain of the monkey’s diplomatic purpose, perhaps that just emphasizes the significance of their scientific feat: they deduced where a 1,700-year-old monkey lived over its lifetime based on what it ate.