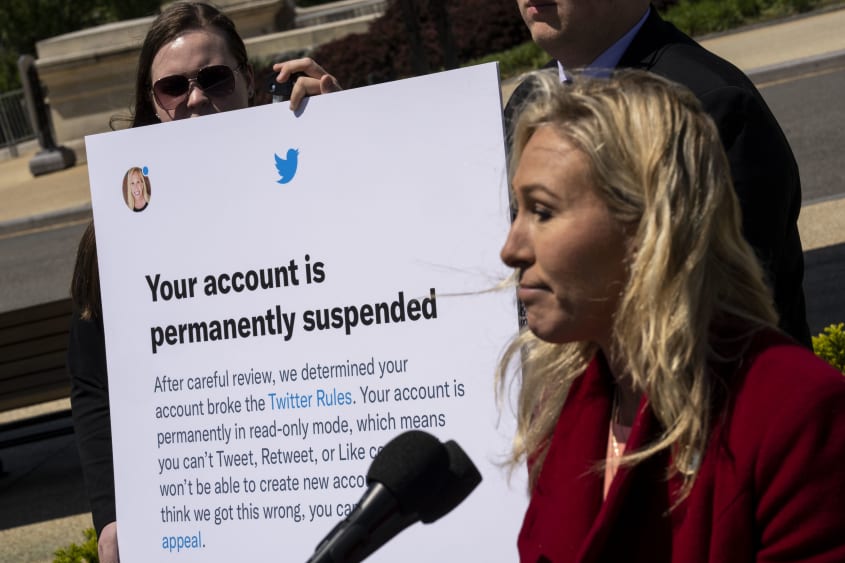 Less than one year after Twitter “permanently suspended” Rep. Marjorie Taylor Greene’s personal account from its platform for violating its company policy on COVID-19 misinformation, the Georgia Republican returned on Monday to the site she’d once blasted as “an enemy to America.” Greene’s account is a beneficiary of new owner Elon Musk’s rolling effort to reactivate predominantly far right-wing figures previously barred under Twitter’s earlier leadership, including former President Donald Trump.

In a more than hour-long broadcast from her newly resurrected personal account (her official congressional account, @RepMTG, has remained active since her suspension) Greene vowed to spend her time “testing every limit of free speech that I have,” asking at one point “why does it take a billionaire buying Twitter to restore people’s freedom of speech?”

Greene’s personal account was banned in early 2022, following several temporary suspensions for election and COVID-misinformation messages. While Twitter did not give an official reason for her permanent suspension at the time, Greene later claimed it was the result of her having tweeted statistics from the Department of Health and Human Services open-submission Vaccine Adverse Event Reporting System.

In spite of her promise to test the limits of free speech, Greene’s return to Twitter on Monday has largely consisted of retweets of her initial announcement video, and fundraising appeals she claimed would make up for lost income she was unable to solicit while her non-congressional account was banned.