Pythons are eating alligators and everything else in Florida. Snake hunters stand poised to help. 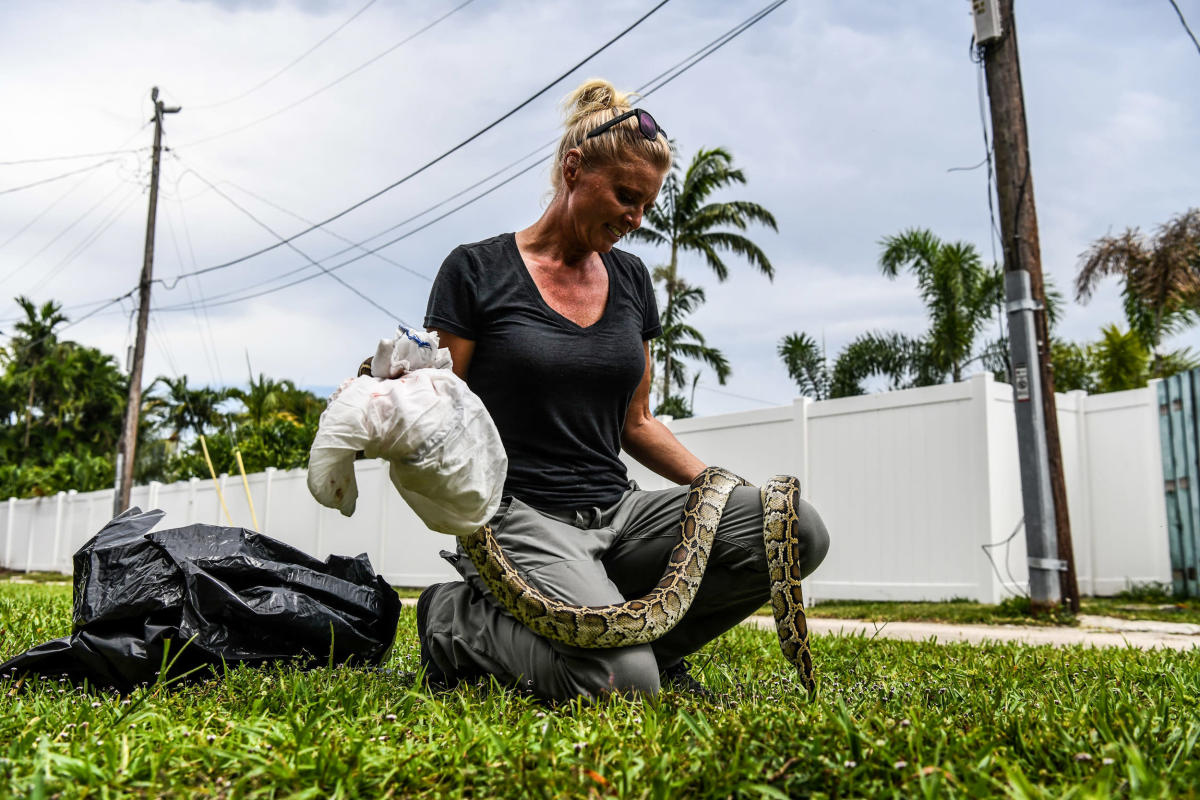 WEST PALM BEACH, Fla. — The Florida Python Challenge, an annual statewide competition that kicks off Friday, will bring hundreds of snake-hunting professionals and novices to South Florida to hunt what wildlife officials are calling the state’s most concerning invasive species: the Burmese python.

Among those preparing for the 10-day hunt: Amy Siewe. Standing 5’4” and weighing 120 pounds, Siewe may appear small. But when it comes to hunting Florida’s Burmese pythons, Siewe is mighty.

As a paid contractor for the state of Florida, Siewe, who calls herself a “python huntress,” searches for the reptiles year-round. The Florida Python Challenge invites novices to hunt alongside professionals like Siewe, and compete for cash prizes. This year’s challenge runs Aug. 5 through Aug. 14. Its goal is to both nab snakes and raise awareness of the environmental harm they cause.

“The proliferation of pythons is an emergency situation for our native wildlife in South Florida,” said Michael Kirkland, senior invasive animal biologist for the South Florida Water Management District and the manager of Florida’s Python Elimination Program. “Human detection right now is the most effective tool in our toolbox.”

Kirkland said professional contractors like Siewe have removed 10,000 pythons since the state began employing them in 2017. With the additional help of novices during the challenge, the state hopes to catch hundreds more.

“When it comes to pythons, we need all the help and awareness we can get,” he said.

Participants in the challenge are required to pay a $25 registration fee and take an online course that requires them to prove, among other things, they can distinguish a Burmese python from native Florida snake species.

Awards of up to $2,500 will be given in a variety of categories, including the most pythons caught and the longest pythons nabbed.

For the professional hunters taking part, the challenge is extremely competitive. All are veterans when it comes to capturing the sizable snakes. Siewe, a former real estate agent who moved to Florida from Indiana, earns $13 an hour for the time she commits to hunting pythons throughout the year, then an additional $50 for the first 4 feet of any python she catches, and $25 for each foot beyond that.

The first python Siewe nabbed measured more than 10 feet. “I caught it by myself, wearing flip-flops,” Siewe said, noting she found it in the middle of a Florida highway.

She disoriented the snake by placing a pillowcase over its head, then put the snake in the trunk of her Camry.

The largest python Siewe has caught was 17 feet, 3 inches, and weighed 110 pounds.

“I jumped on her in a ditch on the side of the road, all 17 feet of her,” Siewe said. “She had the biggest snake head I had ever seen. That was a real battle of strength.”

Among those facing off against Siewe in this year’s Florida Python Challenge: fellow professional python hunter, and defending challenge champion, Dusty Crum. A Florida native, Crum, 42, snagged the longest python in the competition’s professional category last year, catching a 16-foot python. In 2016, he was part of a three-man team that took top honors in the challenge, catching 33 pythons.

“A lot of it is luck, but it’s also about being in the right place at the right time,” Crum said. “It’s anybody’s game.”

Snake hunters use a variety of equipment to get the job done, ranging from snake hooks to special carry bags to an array of lights that can spot the reptiles in the dark of night.

To prepare for this year’s challenge, Crum is employing his carefully curated collection of snake-catching technology.

“When it comes to the challenge, it’s guns blazing,” Crum said. “I’m trying to utilize all my equipment: little geo-trackers, four-wheelers. I’ve got swamp buggies, monster trucks with big tires on them. We outfit those with lights on and I’ll be able to access places the general public can’t get to.”

Python hunting, Crum and Siewe said, is not for the faint of heart. While pythons aren’t venomous, they are powerful — and known to bite.

“They’ve got hundreds of teeth, and when they bite you it’s like needle pricks,” Crum said. “The worst thing that can happen is when the tooth breaks off and gets stuck in you, and it gets infected.”

Like Crum, Siewe says she works to repurpose portions of the pythons she catches. “I use the leather to make Apple watch bands,” she said.

Crum and Siewe both say they’re “in it to win it” when it comes to this year’s challenge.

Neither plan on getting much sleep during the competition, as pythons are nocturnal, meaning the best time for hunting is late at night.

Still, they said, the real goal of the challenge has less to do with any individual victories they might score, and far more to do with the greater cause both say they’re fighting — and hunting — for.

“This isn’t a trophy hunt or a sport hunt,” Crum explains. “This is an environmental hunt. It’s hunting to save our environment. It’s a special feeling when it’s man versus beast, fighting for the environment.”

No humans in the U.S. have been killed by pythons, but plenty of pets have, and wildlife officials worry pythons will destroy entire populations of Florida native species if they’re not stopped. Among the mammals in the Everglades that pythons are decimating: marsh rabbits, raccoons, foxes, deer and bobcats.

“The Burmese python is one of the largest snakes in the world, capable of reaching 20 feet long, and because of our climate the pythons are able to thrive in Florida by preying on our wildlife,” Kirkland said. “In some regions of Florida, up to 95% of fur-bearing animal populations have disappeared.”

The pythons are even eating Florida alligators.

Pythons made their first appearance in the Everglades in the 1970s, likely a result of a pet snake being released into the wild, but the population did not explode until the 1990s.

That’s when Hurricane Andrew struck Florida, destroying, among other things, several python breeding facilities. Kirkland said there’s no definitive proof that the destruction of breeding farms is responsible for the explosion of Florida’s python population. “But it didn’t help,” he acknowledged.

There’s no official estimate of how many pythons there are in Florida, owing to their stealth nature.

“They are very hard to find,” Spencer said. “For every one python we find, there are 99 more out there.”

Increasingly, Spencer said, pythons are showing up in people’s yards and boats, as the snakes literally swallow more and more Florida territory.

That’s where human hunters come in.

“I have always had this obsessive fascination with snakes and reptiles since I was little and my dad taught me to catch fish,” Siewe said. “I thought, ‘Why isn’t this passion [for] puppies or kittens or something normal?’ It’s not — it’s snakes.”