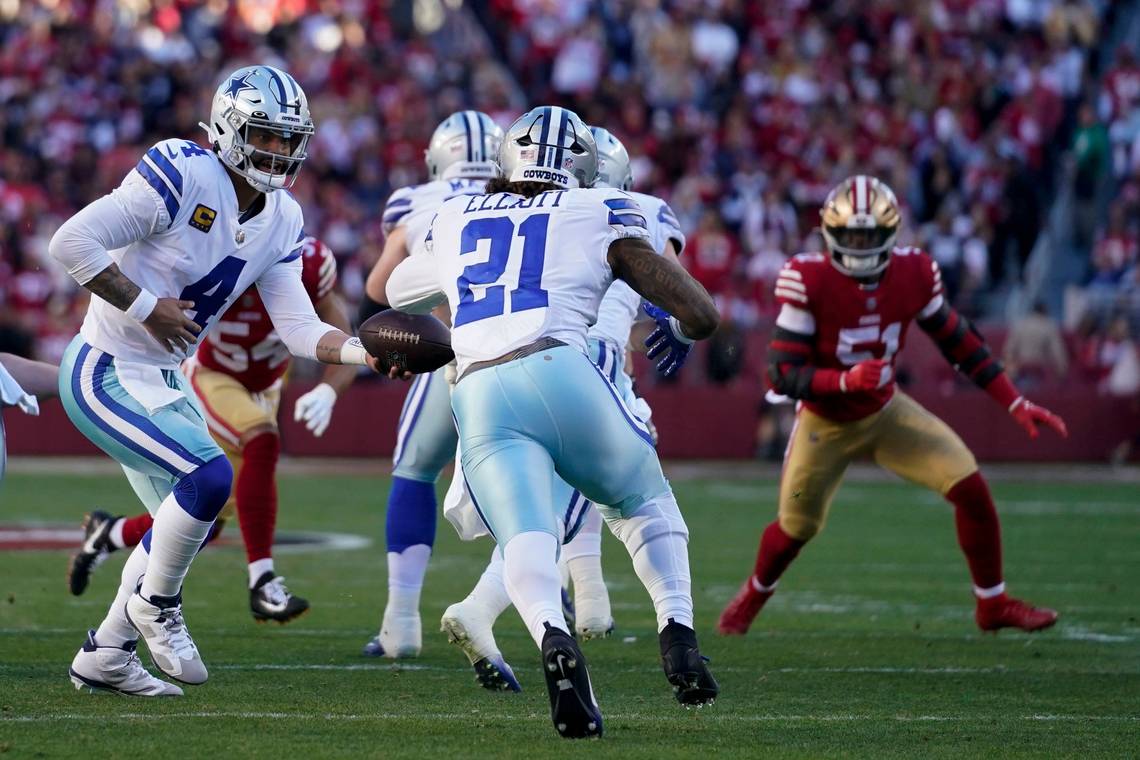 In a mostly empty locker room, Dak Prescott took a seat in his locker, right next to his friend, Ezekiel Elliott.

In a locker room that was awkwardly quiet, where most of their teammates cleared out to the team bus as quickly as possible, the combined silence between these two carried a heavier weight.

The season was over, and the finality short of the desired goal is always hard enough.

This was not only the end of the season. This is the end of era for the franchise, too. These two know.

Zeke and Dak came to the Dallas Cowboys as rookies in the draft class of 2016, and in their time together they achieved so much.

The Cowboys’ divisional round playoff loss against the San Francisco 49ers on Sunday is likely the last we will see of this tandem together.

While Dak will return to the team in 2023, it’s hard to envision a scenario where the Cowboys do anything other than release their former first round draft pick.

After the game, in that empty locker room, I asked him if he believes he will be back for the 2023 season.

To his credit, he didn’t lie and say he hasn’t thought about it. Or that the topic “is the furthest thing from his mind.”

Even if he accepted a substantial paycut, it’s hard to see why the Cowboys would want him back.

They drafted him No. 4 overall in 2016. They ran him into the dirt. He won two NFL rushing titles in his first three years in the league.

He held out to get his massive second contract.

Now the Cowboys need young legs again at his sport’s most disposable position.

In the Cowboys’ 19-12 loss against the 49ers on Sunday, Zeke was all but demoted behind Tony Pollard.

Zeke technically started, but the first Cowboys’ play was a penalty. Then Zeke came out in favor of Pollard.

The only reason Zeke saw as much action as he did was because Pollard sustained a left ankle injury in the first half that knocked him out of the game.

While Pollard was being fitted for a protective boot and handed crutches, Zeke tried to prove he’s still got it.

Despite the increased priority, Zeke ran 10 times for 26 yards against the 49ers. His longest run was five yards. He caught two passes for seven yards. He was fortunate one of his drops didn’t end up as an interception.

At least twice he struggled in pass protection, previously an area where he was so good he was essentially an extra guard.

Against the 49ers there were plays when the hole was there, and Zeke simply could not reach it. He can no longer exploit such opportunities the way he could early in his career when he was the game’s best running back.

On the final play of the game, when the Cowboys were in down to “Crazy Time” and lined up in a bizarre formation that featured Zeke as the center, he was knocked nearly all the way back into Prescott’s feet.

During the season, Zeke basically split time with Pollard, but it was evident who was the better runner and player. Zeke ran 231 times for 876 yards, both career lows. He averaged a 3.8 yards per rush, another career low.

This is not complicated.

What he’s no longer worthy is of a spot on a team that sees itself as a contender.

If he looked like he might have something left, the Cowboys might have asked Zeke to restructure his contract the way they did with defensive end Tank Lawrence.

That’s not going to happen. Expect the Cowboys to cut Zeke, and select a running back in the upcoming draft. They might have to take two, depending on the severity of Pollard’s injury; Pollard can be a free agent as well.

Zeke is scheduled to make $10.9 million next season, and the Cowboys can release him with minimal damage to their salary cap situation.

There will plenty of other Cowboys to move on, but Zeke will be the highest profile exit.

He was a solid, exciting player in his seven years with the Cowboys but after watching the playoff exit it’s obvious this era is over.

And both Dak and Zeke know it.

15 Celebrity Couples Who Were Set Up By Other Famous People