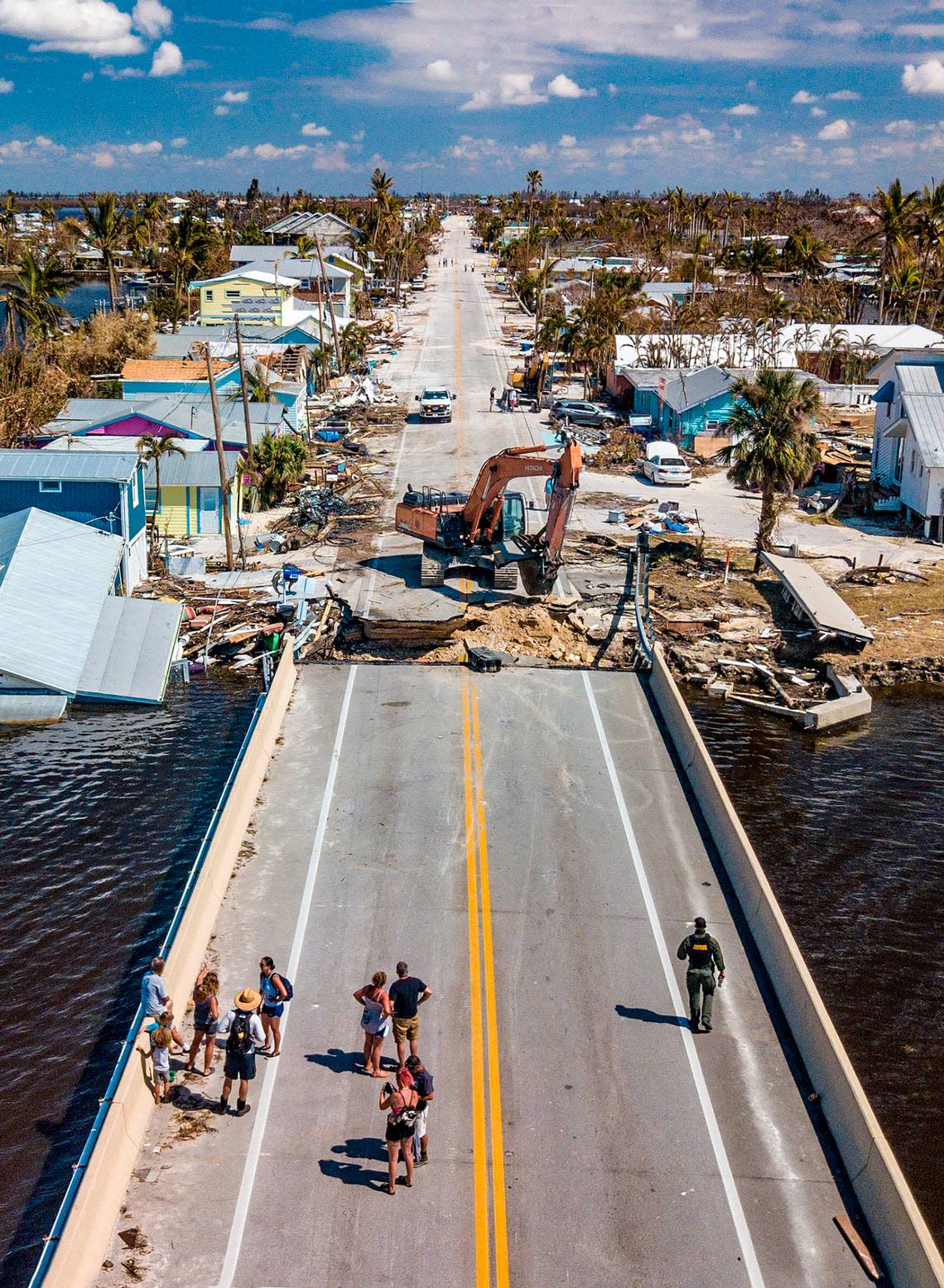 Hours before Florida Gov. Ron DeSantis announced that emergency road and bridge repairs to Pine Island had been completed ahead of schedule on Wednesday, cheers and a little laughter greeted some of the first motorists to cross a temporary bridge built to restore access by land to the island, which took much of the brunt from Hurricane Ian.

Work on the bridge began Monday and Florida Department of Transportation crews finished the repairs in less than three days, DeSantis and FDOT Secretary Jared W. Perdue said in an FDOT statement from Tallahassee.

“Within 24 hours after I asked FDOT to get involved, we had more than 130 trucks rolling in and crews got to work,” DeSantis said in the statement. “We made it a priority and we didn’t just get it done – we got it done quick. I want to thank the dedicated FDOT crews for working around the clock to restore the community’s access to Pine Island.”

READ MORE: Hurricane Ian blasted Pine Island like never before. The community is sticking together

The bridge has not opened just yet for the public but priority access will be for emergency vehicles and first responders, Michael Williams, FDOT deputy communications director, said in an email to the Miami Herald. Williams did not say when the bridge would be open to the 9,000 residents who live on the island, many of whom fled before Ian and have been anxiously awaiting to return to see how their homes fared.

Among the first to pass over the water on wheels as seen in a video posted Wednesday morning by Brandon Lynaugh on a closed Pine Island Facebook page: a police car and a Publix truck carrying supplies to help a community largely cut off from civilization.

“What an extraordinarily beautiful sight to see. Rejoice!” posted Christian Conner after viewing the video on the Facebook site.

“Hundreds of loads of sand and rock, various pieces of heavy equipment, and dedicated crew members have literally helped pave the way to recovery for this community. The Department was honored to be called to help support Florida’s communities in their greatest time of need,” said Perdue in a statement. “We are proud to have worked alongside our partners, Lee County, and deliver on our promise of reconnecting this community to the mainland as quickly as we possibly could.”

Hurricane Ian’s storm surge and Category 4 winds washed out roads and isolated residents who rode out the storm on the 18-mile, mangrove-wrapped Pine island when the cyclone made landfall at Cayo Costa on Wednesday, Sept. 28, an island just across Pine Island Sound.

At a Sunday afternoon press briefing in Arcadia, DeSantis said he had directed the Florida Department of Transportation to build a temporary bridge from Matlacha to Pine Island to make the area accessible by vehicle. Since the bridge was down, many residents have hailed boats to get them to the island.

Before Ian, Pine Island was home to fishing villages, snowbirds and long-term residents, who now face the long road to recovery.

Before convoys of emergency crews, police and grocery deliveries could gain access, some frightened residents took to social media to plea for aid.

“We do not have any help in St. James City, there are so many people here that have completely lost everything like elsewhere,” Denise Martinez posted Sunday morning on a Pine Island Facebook group. “As of this morning, nobody has brought in supplies besides the people trying to get to the island themselves to check on loved ones or if they still have a home. All of the people on the island need food, water, gas, propane, they do not even have a roll of toilet paper. Something needs to be done today or more people will die. It is a complete war zone down here.”

According to the governor’s office and FDOT, permanent repairs to the Pine Island Bridge will be constructed after immediate recovery efforts subside. “While the permanent replacement is expected to take some time to complete, the work completed this week provides safe and immediate access,” the statement said.

The governor’s release did not say to whom the contract was awarded.

READ MORE: Your favorite Sanibel hangouts were ground zero of hurricane. A look at some of them