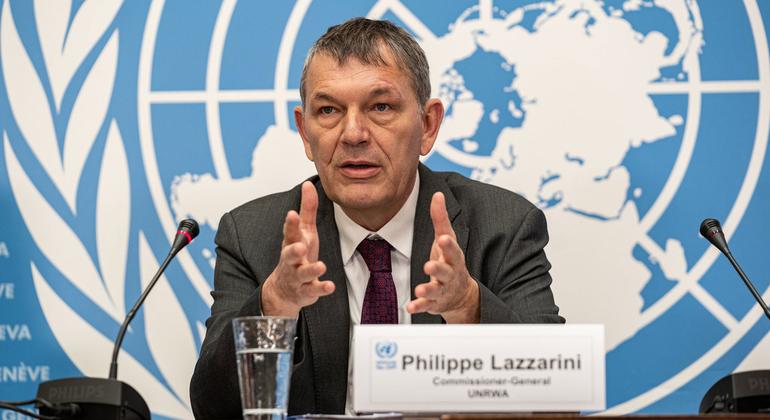 Head of UNRWA, Philippe Lazzarini, told journalists in Geneva that competing global crises, and skyrocketing levels of poverty and unemployment among Palestine refugees, have put immense strain on them – and the agency – which started the year some $70 million in arrears.

“On the one hand we are asked to deliver public-like services to one of the most under-privileged communities in the region. We obviously are a UN agency (and) abide by UN values, but in reality, we are funded like an NGO, meaning that we depend on voluntary funding from Member States.”

Most Palestine refugees now live below the poverty-line and many depend on humanitarian assistance, including cash and food, from UNRWA.

“I thought that they had reached rock bottom some time ago, but I discover each time that this misery people are confronted with is getting worse and worse,” the UNRWA Commissioner-General said, of his recent visit to meet Palestinian refugees in Syria. “I witnessed first-hand indescribable suffering and despair.”

The desperate situation of Syria’s Palestine refugees is mirrored in Gaza and Lebanon – where more than nine in 10 live below the poverty-line – and in Gaza. “Many told me that all they asked for was a life of dignity, that’s not much to ask for,” the Commissioner-General explained.

“We have seen increased poverty in the Palestinian refugee camps in Lebanon …there has been a stiff increase compared to previous assessments, which means again, we are the only lifeline for this community. The same happened in Gaza; in Gaza, we have more than one million people who are also dependent on our food assistance.”

Highlighting the vast scope of UNRWA’s work, Mr. Lazzarini explained that the agency provided services, much as a small government would. “We act in reality as a Minister of Education, a Minister of Primary Health, a Minister of Municipalities, a Ministry of Social Services for this extraordinarily vulnerable group of Palestinian refugees,” he said.

“We are also providing emergency humanitarian assistance and hence my appeal this morning for a total of $1.6 billion.”

In response to a renewed escalation of violence, a Palestine refugee family find refuge at the UNRWA Beit Lahiya Preparatory Girls’ School in northern Gaza.

Amid chronic funding shortfalls, UNRWA has expanded e-health access and telemedicine and launched a digital learning platform. “In the last three years, we had a ‘zero growth’ budget, which stayed at the same level,” Mr. Lazzarini said.

“Obviously, it didn’t meet all our needs, and that forced the agency to put in place austerity measures. And austerity comes at a cost; today, for instance, we regularly have up to 50 children per teacher attending class.”

Similarly tough conditions apply in healthcare provided by UNRWA, which provided seven million medical consultations in 2022. “On average, the doctor spent no more than three minutes with each patient, so it’s a bit quick, too,” the Commissioner-General said.

UNRWA’s 2023 appeal for $1.6 billion includes $848 million for core services including health, education, relief, social services and protection. Another $781.6 million is required for emergency operations in the Occupied Palestinian Territory, Jordan, Syria and Lebanon.

African leaders commit to end AIDS among children by 2030