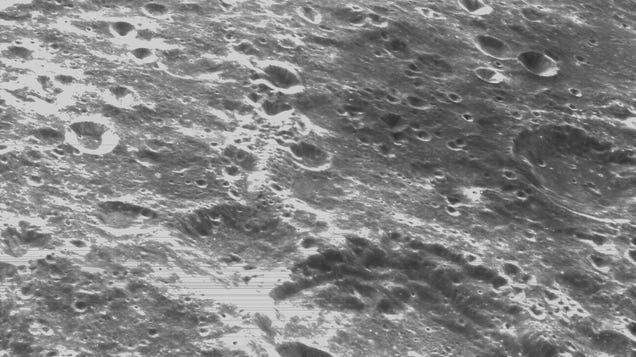 The Moon is a cold, dead, and desolate place, as these new images, captured by NASA’s Orion, attest.

This past Monday, the uncrewed Artemis 1 capsule performed the first of two course correction maneuvers required for entry into a distant retrograde orbit. It was during this course correction that Orion performed its closest approach to the Moon, coming to within 80 miles (130 kilometers) of the lunar surface. Naturally, NASA took the opportunity to snap a bunch of cool photos, which the space agency released yesterday.

The images were taken during the sixth day of the Artemis 1 mission, an uncrewed demonstration of NASA’s Orion capsule.

The gigantic new Space Launch System (SLS) rocket blasted off from Kennedy Space Center on November 16, sending Orion on its 25.5-day journey to the Moon and back.

Orion’s optical navigation camera is one of 16 on board the spacecraft. In addition to taking images, the camera assists Orion with navigation, and it does so by capturing images of the Earth and Moon and various phases and distances. And as NASA points out, the images taken by the optical navigation camera will provide an “enhanced body of data to certify its effectiveness under different lighting conditions as a way to help orient the spacecraft on future missions with crew.”

A surface 4 billion years in the making

The Moon formed over 4 billion years ago, likely the result of a Mars-sized object colliding with Earth. Our natural satellite has no atmosphere to speak of, and with minimal surface activity, the Moon simply collects craters over time. Researchers estimate that roughly 225 new impact craters appear every seven years or so.

Back to the Moon

Through its ambitious Artemis program, NASA is seeking to return humans to the Moon, but in a sustainable and prolonged manner. The ongoing Artemis 1 mission is meant to set the stage for Artemis 2, a repeat mission but with compliment of astronauts riding aboard Orion. This sequel mission is currently for 2024.

A wave to Apollo

Orion still needs to perform a second course correction maneuver, which it will attempt on Friday, November 25 at 4:52 p.m. ET. This burn will move Orion into distant retrograde orbit, where it will stay for about one week. The spacecraft is currently traveling at an abound trajectory at speeds reaching reaching 5,102 mph (8,211 km/hr).

Here for a good time, not a long time

The first two Artemis missions are a precursor to Artemis 3, in which NASA will attempt to land a man and a woman on the lunar surface. The mission is currently slated for 2025, but it likely won’t happen until 2026 or even later.