mothers and wives of Russian soldiers issue demand to Putin 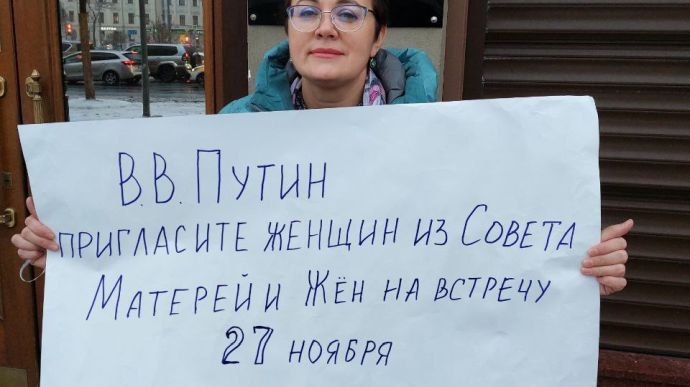 The civil movement of family members of Russian mobilised and contract soldiers, known as the “Council of Mothers and Wives”, is demanding that their loved ones be brought back from the front and that its members be given a chance to meet Vladimir Putin, the President of Russia.

Details: Olga Tsukanova, founder of the group, recorded a video address to Putin after it was revealed that he was going to hold a meeting with mothers of servicemen. None of the members of “Mothers and Wives” were invited to this meeting.

Quote: “It’s the third day that the Council of Mothers and Wives has been in Moscow… We are doing everything we can to call on the authorities for dialogue…What do we see today? We see that Vladimir Putin is planning to meet with the mothers [of servicemen – ed.) on 27 November. From experience, I can accurately describe what this meeting will look like – the mothers will ask a few “acceptable” questions, coordinated and approved in advance, and no one else will be able to come to this meeting or ask a question. No matter how much we try, we fail…

Mr.Putin, are you a man or what? Will you have the courage to personally meet not puppet mothers and wives, checked and approved by you, but real ones, those who have come from all over the country at their own expense just to see you. We are here, in Moscow, and we are ready to meet you. We are waiting for your response! Or will you hide again?

There are men in our Ministry of Defence, men in the military prosecutor’s office, men in the president’s administration – the president himself is a man. Mothers are on the other side. So, dear men, will you talk with us, or will you hide? Russian mothers have a lot of questions to ask. Come on, communicate with us, enough of your shutting our mouths with your ostentatious events.”

More details: The Vedomosti newspaper reported on 22 November that its sources close to the Russian president’s administration report that Putin is meeting mothers of Russian soldiers this week. The meeting will be dedicated to Mother’s Day, which is celebrated on 27 November. Dmitry Peskov, press secretary of the president, confirmed that the Kremlin is preparing Putin’s meeting with the mothers of Russian servicemen.

Valentyna Melnikova, the secretary of the Union of the Committees of Soldier’s Mothers in Russia, told the Verstka media outlet that members of that organisation were not invited to the meeting with Putin, either.

The authorities decided not to invite the members of the well-known unions of mothers to the meeting, as these activists are said to behave too aggressively and “loudly”, as reported by Verstka’s source in the Russian Parliament.

The other source close to the Kremlin states that the authorities are thinking of creating an alternative patriotic movement of soldiers’ mothers. Putin will be meeting them with this very aim.

Family members of mobilised Russians from different regions of the country, interviewed by Verstka, also know no family members of soldiers who were invited to the meeting with the president.

Since the end of October, family members of mobilised Russians in 15 regions of the country have gone out to protests demanding that their loved ones be withdrawn from the front and supplied with everything they need.