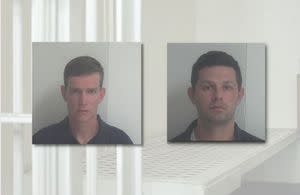 A Walton County couple has been arrested and are facing child sex crime charges for acts deputies say they committed against their adopted children.

Deputies were able to get arrest warrants for both adult men living in the home, William Dale Zulock, 32, and Zachary Jacoby Zulock, 35.

Walton County’s Division of Family and Child Services joined deputies in responding to the home to help protect the two children in the home.

After making sure the children were safe, investigators found evidence that the couple, who were the adoptive fathers of the pair of brothers living there, were recording themselves committing sexually abusive acts against the children.

Both men are being held in the Walton County Jail on charges of aggravated child molestation, sexual exploitation of a child and enticing a child for indecent purposes. William Zulock has an additional charge of child molestation.

Deputies say their investigation is ongoing, but the boys are now safe.