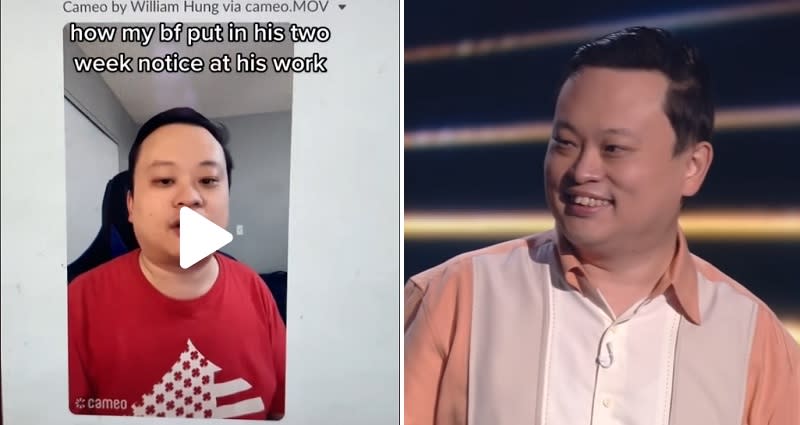 A man recently went viral on TikTok after he hired Hong Kong-born American motivational speaker William Hung to announce that he is leaving his workplace.

Chris Gonzalez, a 33-year-old man from California, hired Hung, 39, through his Cameo profile to create a video announcing his departure. The video was then shared online by Gonzales’ girlfriend, Joellen Lu, on TikTok on May 11.

The 31-second video shows Hung letting Gonzalez’s workmates at the time know that he would be putting in his notice. Hung then ended his message with an original song.

“Hi, everyone, this is William Hung. Christopher is going to put in the notice to leave the current job for a new job in two weeks,” Hung says in the recording. “He found a new job, but he’ll miss all of you. You’re all amazing, so don’t give up creating the life you want.”

Speaking to BuzzFeed, Lu said they were excited to see Gonzalez’s former workmates’ reactions to the custom video message, and that he received some private messages telling him that what he did was “epic.”

More from NextShark: Terminally ill Singaporean man in his 70s fulfills wish to marry his girlfriend of 40 years

“We were both working from home, and I was so excited to witness the reaction, knowing he dropped the ‘@here’ [notifying everyone on Slack], and I decided to film the reactions and replies in real-time,” Lu said.

“Chris instantly started receiving direct Slack messages from his different coworkers congratulating him and saying it was an ‘epic’ way to go,” she added.

In an interesting twist of fate, Gonzalez’s new co-workers had already seen the viral video, and some suspected that the new “Christopher” in their workplace might be the same person Hung was referring to in the clip.

“A new coworker had speculated that the video he had previously seen on TikTok was the new ‘Chris’ at their office, and Chris confirmed,” Lu told BuzzFeed. “When his new boss found out, she proudly shared her new team member’s video in their work Slack, and people loved it. It was almost like a rite of passage.”

Lu also revealed that the song Hung sang in the custom video was a surprise, as Gonzalez never mentioned anything about him singing in his request.

“Chris never instructed or prompted William to sing — his original masterpiece was conceived all on his own,” Lu said. “Chris absolutely loves his new job and is excited William Hung got to be a part of that moment.”

Born in Hong Kong on Jan. 13, 1983, Hung became an internet sensation after his unsuccessful “American Idol” audition in 2004, where he performed the iconic song “She Bangs” by Ricky Martin.

Despite being rejected and receiving sneers from judge Simon Cowell, Hung attracted an online cult following for his incredibly positive attitude, saying, “I already gave my best, and I have no regrets at all.”

Soon after his “American Idol” appearance, Hung was offered a record deal and has released several albums, including “Inspiration” and the holiday album “Hung for the Holidays.”

In May, Hung wasinvited to return to “American Idol” for its 20th-anniversary episode “The Great Idol Reunion,” where he performed “She Bangs” with the same energy he had almost two decades ago.