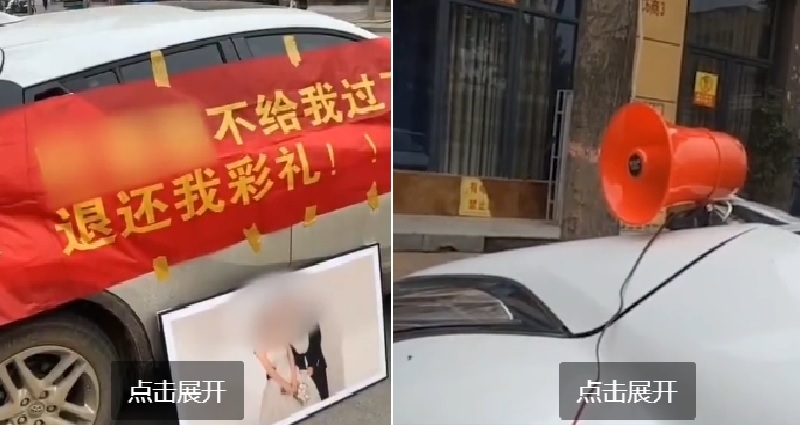 A man has gone viral on Chinese social media after publicly demanding his wife refund him a portion of what he spent on their wedding.

The man, identified by local media as Li Shouning, held a demonstration by himself outside the home where his estranged wife, Qian Yulu, lives with her parents in the Chinese province of Henan.

In a clip that has emerged online, Li can be heard demanding that Qian pay him back a total of 140,000 yuan (approximately $19,900) through a loudspeaker.

“We only want the return of the jewelry we bought her, which is worth over 40,000 yuan, and 100,000 yuan in cash,” Li was quoted by South China Morning Post as saying.

More from NextShark: China denies backing Russia in Ukraine, blames US instead for ‘fueling the flame’

The estranged couple got married in late January via a lavish wedding that cost Hou 510,000 yuan (approximately $72,600). The cost reportedly included betrothal gifts, a car and cash for the bride price as demanded by Quan’s family.

Li said he used up money he earned from work, his parents’ savings and money borrowed from relatives to cover the cost.

“We lived close to each other, just 3 km apart, when we met via a matchmaker,” Li said.” We felt good about each other and were engaged just three days after that.”

However, just 33 days after they tied the knot, Qian decided to move back in with her parents following an argument.

According to Li, Qian got upset after he fell asleep and locked her out one late evening coming from work. In June, months after Qian moved out, Li tried to file for divorce at a local court but was denied following Qian’s claims that they remain happily married.

Li has since filed an appeal that has been set for a hearing next month.