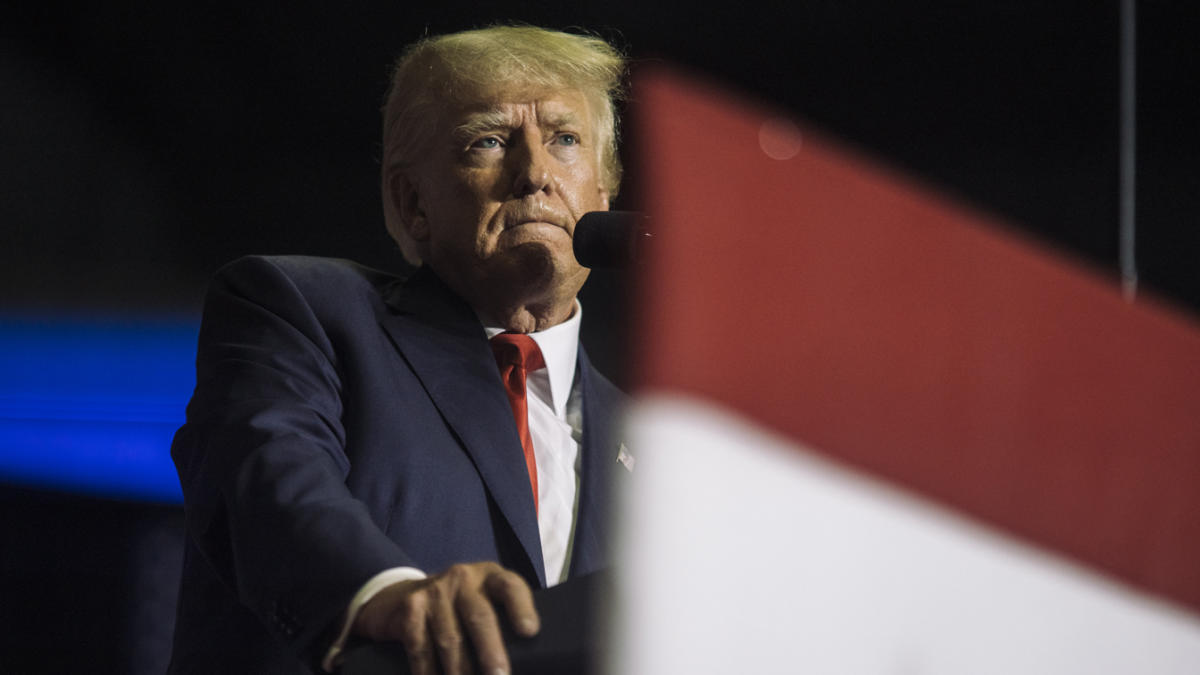 Amid the Justice Department’s ongoing investigation into his handling of classified materials, former President Donald Trump on Wednesday offered a new and rather unusual defense: that he had the power to declassify documents with his mind.

“There doesn’t have to be a process, as I understand it,” Trump said in an interview with Fox News host Sean Hannity. “If you’re the president of the United States, you can declassify just by saying, ‘It’s declassified,’ even by thinking about it.”

“There can be a process, but there doesn’t have to be. You’re the president. You make that decision. So when you send it, it’s declassified,” Trump added. “I declassified everything.”

Paul Rosenzweig, George Washington University law professor and former deputy assistant secretary for policy in the Department of Homeland Security, told Yahoo News via email it reminded him of Johnny Carson’s “Carnac the Magnificent” sketch “where he knows the answers in his mind to questions that haven’t been asked.

“It is not just nonsense; it is nonsense on stilts. It almost seems delusional,” he said.

“Claiming that a president can declassify documents even by thinking about it is absurd,” Barbara McQuade, a University of Michigan Law School professor and former U.S. attorney, wrote in an email. “While a president has many powers, he must actually execute them. His pardon power, for example, cannot be used just by thinking about it. He must issue a document that executes this power.”

“If a president could declassify with a thought, he could literally declassify every document in the possession of the U.S. government with a constitutional Jedi-like power,” Jonathan Turley, a law scholar who testified before Congress in support of Trump during his first impeachment hearing in 2019, wrote in a blog post. “No one would know that there was declassification other than the fact that he removed the documents or treated them as declassified.”

The interview — Trump’s first since the FBI’s search of his Mar-a-Lago estate in Palm Beach, Fla., last month — was broadcast shortly after a federal appeals court ruled that the DOJ can resume scrutinizing the documents that were seized.

The three-judge panel of the 11th Circuit Court of Appeals unanimously stayed the portion of a much-criticized prior ruling by Judge Aileen Cannon, a Trump appointee, that had prevented the government from reviewing the material.

The warrant and property receipt from the FBI’s search showed that agents seized nearly two dozen boxes from Trump’s south Florida home, including 11 sets of classified records and some that were labeled “top secret,” the highest level of classification reserved for the most closely held U.S. national security information.

“[Trump] suggests that he may have declassified these documents when he was President,” the judges stated. “But the record contains no evidence that any of these records were declassified.”

In a filing last week, Trump’s attorneys stated that he had the power to declassify records but stopped short of saying he actually did so.

The ruling was also a rebuke to the claims made by Trump’s legal team about the former president’s supposed right to hold on to classified documents.

“[Trump] has not even attempted to show that he has a need to know the information contained in the classified documents,” the judges ruled. “In any event, at least for these purposes, the declassification argument is a red herring because declassifying an official document would not change its content or render it personal.”

In other words, Trump’s claim that he can declassify documents with his mind is “irrelevant,” Andrew Weissmann, a legal analyst, said on MSNBC.

“It has nothing to do with a legal defense here,” Weissmann said. “Donald Trump is engaging in distractions. It is not a legally relevant thing even if you could somehow declassify things by merely thinking about them.”

“Even if Trump had declassified once classified documents, the fact that they bear classified markings means that they are government records to which he is not entitled,” McQuade added. “In addition, potential charges do not require the documents to be classified to make Trump’s retention of them a crime.”