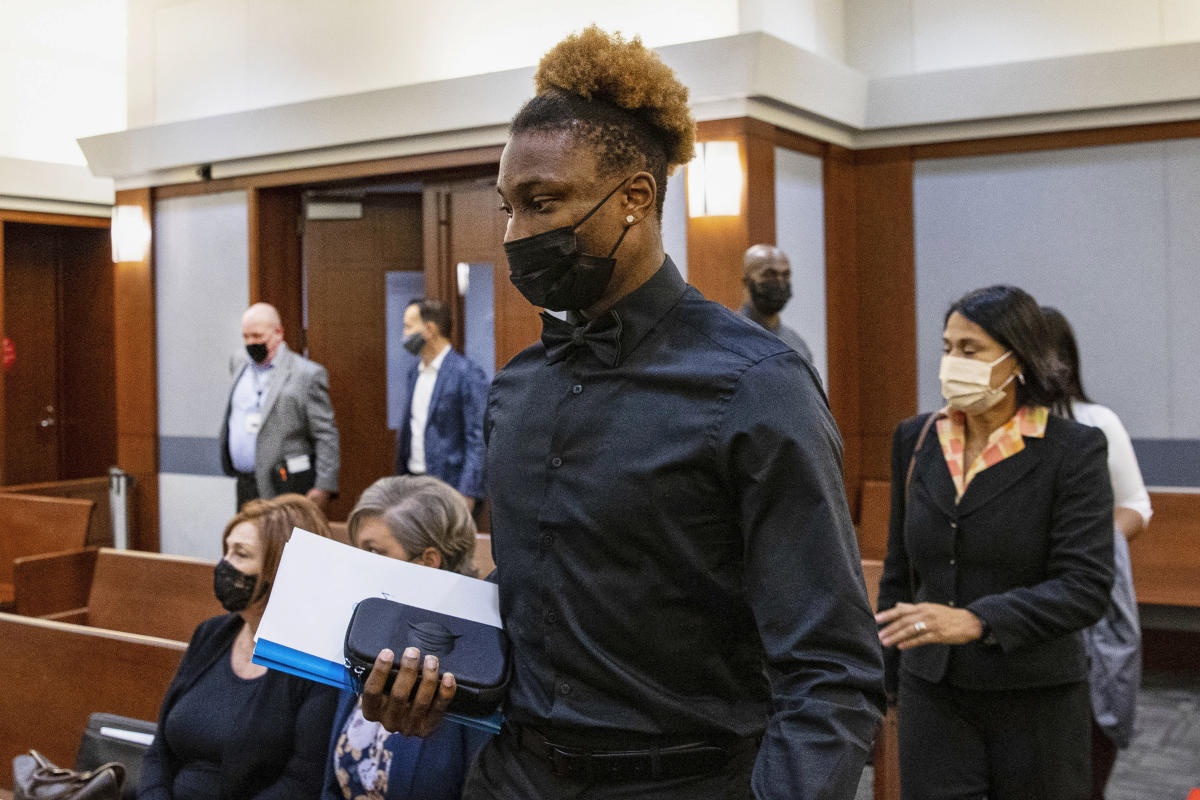 LAS VEGAS (AP) — A Nevada judge on Wednesday delayed a long-awaited hearing to determine whether former Las Vegas Raiders player Henry Ruggs will stand trial in a fatal 2021 crash, saying it can’t proceed until the case is properly assigned to a judge in the lower court.

The decision came in response to a request filed Monday by attorneys for Ruggs asking the state judge to block Las Vegas Justice of the Peace Ann Zimmerman from presiding over the case.

Until recently, Zimmerman had been overseeing all DUI cases in Las Vegas, including the case against Ruggs, as part of a specialty court program. But those cases were transferred earlier this month to a different judge appointed to take over the specialty court.

Ruggs, who is out of custody on bail, is charged with driving under the influence on Nov. 2, 2021, and slamming his Chevrolet Corvette into the SUV of Tina Tintor, causing the vehicle to go up in flames. Trapped inside the SUV, both Tintor, 23, and her dog, Max, died.

Lawyers Richard Schonfeld and David Chesnoff argued in their filing that Zimmerman “singled out” Ruggs and violated his right to equal protection when, without notifying the attorneys, she decided to keep the former wide receiver’s case on her calendar while the rest of the “thousands” of DUI cases were transferred to the new judge.

“It’s outrageous,” Chesnoff said in court Wednesday. “We’ve been like deer in headlights.”

Clark County District Judge Jennifer Schwartz said she wanted to hear from attorneys representing Zimmerman and the Justice Court before reaching a decision and scheduled another hearing for March 22, at which point she is expected to deliver a ruling.

Gesturing to the courtroom gallery, where Ruggs was seated with relatives, Chesnoff added: “Mr. Ruggs has dutifully been defending himself in a very difficult case. This is a critical stage of a criminal proceeding, and a judge just walks down the hall and goes to another judge and says, ‘This is what I want to do.’”

Zimmerman had been scheduled to hear evidence in the case on Feb. 1 after delays.

Now that hearing to determine if Ruggs will stand trial isn’t likely to take place until after late March.

Zimmerman didn’t respond to an email from The Associated Press requesting comment. But Schonfeld and Chesnoff said they reached out to Zimmerman after learning she had requested to keep their client’s case.

According to their court filing, Zimmerman said she and the new DUI specialty court judge came to an agreement that she would “finish hearing this case” because she “had previously made some substantive rulings in the case.”

“It is not uncommon or extraordinary for a judge to retain a case to finish hearing it,” she told Schonfeld and Chesnoff.

After the hearing, the lawyers told The Associated Press they were pleased with Schwartz’s decision to delay the hearing and “study the very important constitutional issues” they raised.

Ruggs, who remains on house arrest with electronic monitoring, faces more than 50 years in prison if he’s convicted. The former first-round NFL draft pick was released from the Raiders shortly after the crash.