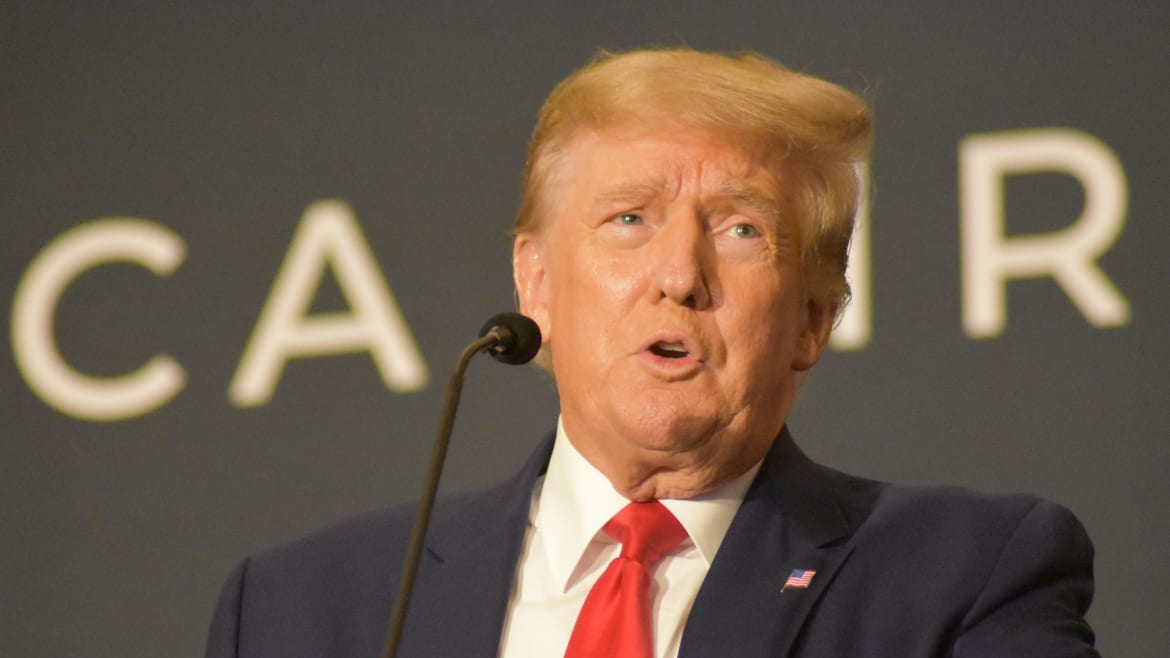 Years of delay tactics and games by the Trump Organization finally boiled over in New York court on Tuesday, when a state judge unleashed on the company and set a firm deadline for what could be the potential doom of Donald Trump’s family company.

The Trump Organization is now set to go on trial Oct. 2, 2023, when it will face accusations that it routinely faked property values—dodging taxes and tricking banks in the process.

Justice Arthur F. Engoron took a stern and exasperated tone against the former American presidents real estate company, setting deadlines that ensure the company faces justice long before its founder gets another chance at the White House.

Engoron showed zero patience for the Trump Organization’s attempt to slow down a three-year effort to hold the company accountable for blatantly faking real estate valuations.

The case’s roadmap was decided at Tuesday’s court hearing, where tensions built over years finally spilled over into the courtroom.

From the start, the court hearing quickly descended into an aggressive fight between the Trump family’s lawyers and the judge. Alina Habba, who represents the former president and his company, attacked the investigation and even the judge as wholly unreasonable.

She opposed how the case is now proceeding with speed, and made personal jabs at the judge.

“We will litigate this fully, as we are entitled to,” she warned. “It sounds like we are always in a predetermined situation where you will rule against us. Quite honestly, it’s unconstitutional. It’s improper.”

Engoron then criticized how the company’s response to the lawsuit was to simply repeat the same story: that the AG’s office is engaged in a political witch hunt.

“You can’t keep making the same arguments after you’ve already lost,” he said.

In one particularly snappy exchange, Engoron tried to convince the Trump lawyers to focus on making legal arguments.

“I just think you’re wasting time and resources,” he said.

Habba shot back that this was “the first time you say something I agree with.”

Meanwhile, the Attorney General’s office maintained there was no need to slow this down, pointing out that the vast majority of the million or so documents in evidence came from the Trump Organization itself.

Kevin Wallace, an assistant attorney general, noted that the investigation only took this long because the company repeatedly refused to turn over documents and wouldn’t make the Trumps available for depositions until the judge stepped in again and again.

“The fact it takes us a while to penetrate that doesn’t mean we have a three year trial,” he said, adding that slowing down the case now plays into Trump’s presidential ambitions. “This is all just their aim at delay, delay, delay, trying to push this into 2024. They’re trying to take as long as they can.”

Trump has already accused this investigation of being nothing more than a political prosecution by a Democrat attorney general, and he often vilifies James when speaking to his devout MAGA followers at his rallies. That accusation is usually paired up with disproven claims about the 2020 election he lost and the full-throated defense of his attempts to remain in power.

In court, Wallace criticized the way the Trumps’ lawyers have yet to address the actual substance of the investigation.

“Everything is an affront. ‘It’s wrong. It’s unfair. It’s unconstitutional.’ This is going to be a very difficult case to litigate,” he told the judge.

He also noted that the only reason these lawyers feel overwhelmed now is because Trump put new lawyers on this a year ago.

“The fact that he decided to bring on new counsel at the end of the case—that is a strategic decision but something he’s going to have to live with,” Wallace added.

Clifford S. Robert, a defense lawyer representing Don Jr. and Eric Trump, acknowledged that nearly all of the documents in question come from the company. But he still insisted they need more time, claiming that the current speed “deprives our client an ability to mount a defense.”

But once again, Engoron showed no patience.

“This shouldn’t take that long. The attorney general has investigated for three years… most of this case is about the defendant’s documents, which clearly they have,” he said.

Curiously, the Trumps’ lawyers argued there’s no rush here, given that the company is now being monitored by a retired federal judge who is tasked with ensuring the company stops faking financial documents and does not shift assets in anticipation of the quarter billion dollar lawsuit.

However, the Trumps’ lawyers failed to mention they are currently trying to get rid of that court-appointed monitor in the state’s appellate court.

Both sides also disagreed on another key point: whether this fight will conclude with a bench trial or a jury trial. The Trumps’ lawyers said they prefer a jury trial, which would spare them from facing the wrath of a judge who’s already punished them for ignoring subpoenas, refuses to step away from the case, and keeps winning on appeal.

“We would prefer to have a jury trial. Frankly, that would alleviate many of our concerns about impartiality,” Habba said, taking another swipe at Engoron.

The court hearing ended with the judge refusing to budge, holding firm on a 2023 trial.That means the company could face a devastating financial penalty, be forced to cease operations in New York, and be blocked from raising money in the financial capital of the world in the midst of Trump’s political comeback—the same man who launched his political career on that company’s success.