‘Infinity Pool’ Is a Nearly X-Rated, Disturbing Romp That Has Sundance Clutching Its Pearls 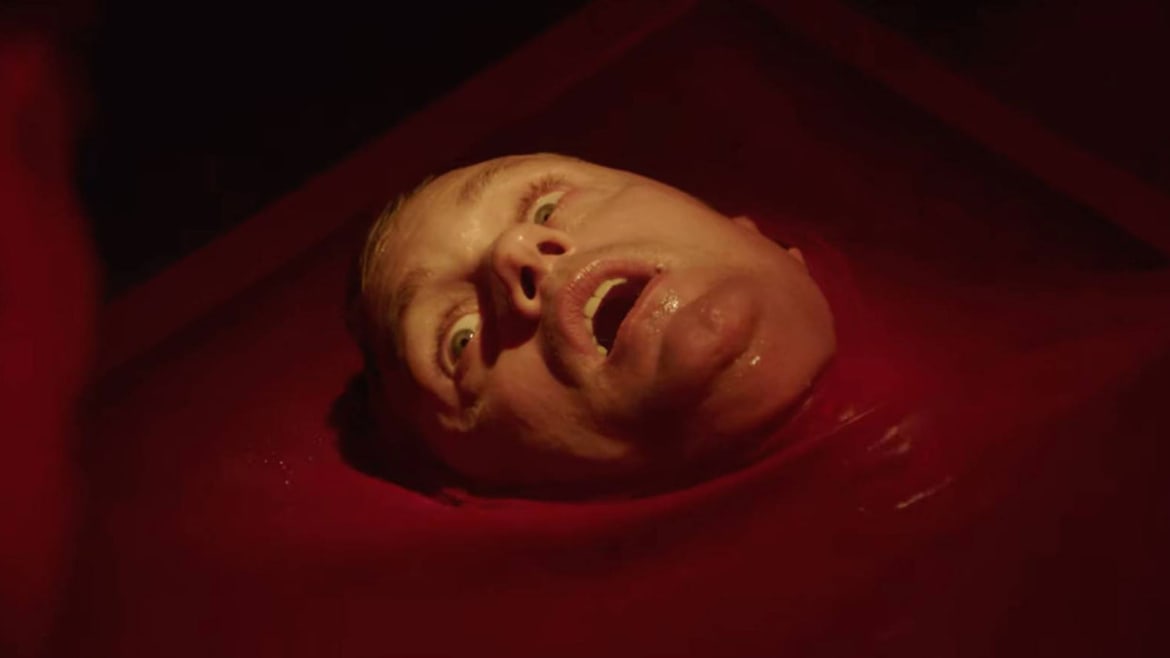 Rising to the challenge of equaling the batshit wildness of his prior Possessor, Brandon Cronenberg writhes around in more psychosexual body-horror violation, mutation, mutilation, and hysteria with Infinity Pool, a film so extreme that the only reasonable response is often laughter.

Not for the faint of heart but precisely the sort of nightmare that fans of Cronenberg (and his father David) crave, Infinity Pool is an ideal fit for the Sundance Film Festival’s Midnight section, where it just premiered ahead of its Jan. 27 theatrical release. The film oozes menace even before its chaos begins, courtesy of ominous snapshots of the vast ocean and white, angular trellises covering the walkways of a swanky resort on the fictional island of Li Tolqa.

It’s here that Em (Cleopatra Coleman) and James Foster (Alexander Skarsgård) are vacationing, seemingly so that the latter might finally find the inspiration to follow up the one novel he wrote—to negative reviews—six years ago. Theirs is a relationship that feels as if it’s quietly fraying beyond repair, and thus when James meets Gabby (Mia Goth) and she introduces herself as a fan, he can’t help but be flattered and enchanted.

James and Em subsequently have dinner with Gabby and her husband Alban (Jalil Lespert) during which they learn that he’s an architect and she’s an actress who specializes in TV commercials—specifically, those that require her to “fail” as a way of highlighting a product’s necessity. That’s weird, and Infinity Pool gets far weirder once Gabby and Alban convince James and Em to join them the following day on an excursion to a remote beach picnic spot.

This is forbidden by the resort, and the fact that the gate through which they exit features enormous rings of barbed wire suggests that the island’s dangerousness isn’t a myth. A more intimate sort of peril, however, materializes once they reach their destination and, while relieving himself in private, James is manhandled by Gabby, who jerks him to completion (in one of many graphic, torrential close-ups) with blank-eyed mechanicalness.

If James is shaken by this sudden encounter, he’s thoroughly rattled when, driving home that night, the car’s headlights go out and he accidentally strikes and kills a local farmer. Convinced to flee the scene rather than take his chances with the island’s ghastly legal system, James and Em return to the resort. Unfortunately, the police come knocking, taking the couple past a network of rusty, winding industrial pipes (the flipside of the earlier trellises) and to a derelict police station.

There, detective Thresh (Thomas Kretschmann) explains the truly bonkers predicament in which James has landed. On the island, those guilty of murder are executed by the victim’s family members—in this case, the farmer’s young son. Yet due to a diplomatic arrangement, perpetrators can pay to have themselves cloned so that their copy, who retains all their memories, can be put to death in their place.

Don’t bother asking how this island has perfected such a technique, or even how the process works. James signs on the dotted line, hands over a wad of cash (from an ATM inside the police station!), strips down and, after being measured, steps into a shower with a floor full of red-blue goo, where he’s engulfed in strobe lights and battered with images of disco balls, nude women, and reflections of himself.

Afterwards, he and Em are forced to watch the boy repeatedly and viciously stab James’ doppelganger. Crazier still, upon returning to their hotel, James—whose passport is now mysteriously missing—is invited to join Gabby, Alban, and some of their friends, who reveal that they too have all undergone this procedure.

James has stumbled into a group of deranged thrill-seekers who view this surrogate-spawning process as a license to indulge their every deviant desire—since, after all, they can just pay to have themselves duplicated in order to escape capital punishment. That’s just the tip of Infinity Pool’s irrational iceberg, with James thrust into a hedonistic vortex of robbery, murder, hallucinatory drugs, orgiastic sex, and local ceremonial masks that resemble fiendishly disfigured faces.

Whether James is himself or his replica is merely the first of many unnerving questions raised by this scenario, as the writer/director turns the film into a swirling, sinister vision of insecurity and strength, self-destruction and rebirth, transformation and desecration, and—during much of its second half—wealthy tourist privilege run madly amok.

Cronenberg dives off the deep end and keeps descending into darker and more malevolent waters, bombarding viewers with schizoid montages of hazy forms, brilliant colors, merging body parts (including copious genitalia), and dripping blood. Close-ups of eyes, necks, and hands are rampant, lending the action a tactile quality that’s as potent as the throbbing malice of Tim Hecker’s electronic score.

The proceedings feel both clinically manicured and soiled, not to mention unhinged. To that end, Goth—fresh off her extraordinary turn in Pearl—proves an entrancing figure of entitled, cunning perversion. Sultry and nurturing, sweet and cruel, she’s the engine that powers this malignant affair as it plummets into an abyss of guises and deceptions, twisted parent-child tensions, and unholy unions.

Anne Hathaway’s ‘Eileen’ Is Dark, Explosive, and Has One Helluva Ending

Like all great horror directors, Cronenberg cares less about making lucid thematic or socio-political arguments than about splattering his fears, anxieties, and hang-ups onto the screen, where they can meet, intertwine, and tear apart at a moment’s notice. Infinity Pool has plenty to say but no eagerness to hold its audience’s hand; its prime motivation is to shock, confound, and overwhelm, and the writer/director once again finds a way to keep escalating the madness until, finally, it becomes outright hilarious.

That Skarsgård is so game for this sort of left-field lunacy—in which he suffers a barrage of manipulation, abuse, and humiliation—confirms that he’s one of Hollywood’s most daring leading men, as interested in eviscerating idealized masculinity as he is in embodying it.

As for Cronenberg, he’s a crazed genius of Frankensteinian symbiosis and division, smashing together disparate elements to create beautifully misshapen monsters. Consider Infinity Pool his finest atrocity to date.