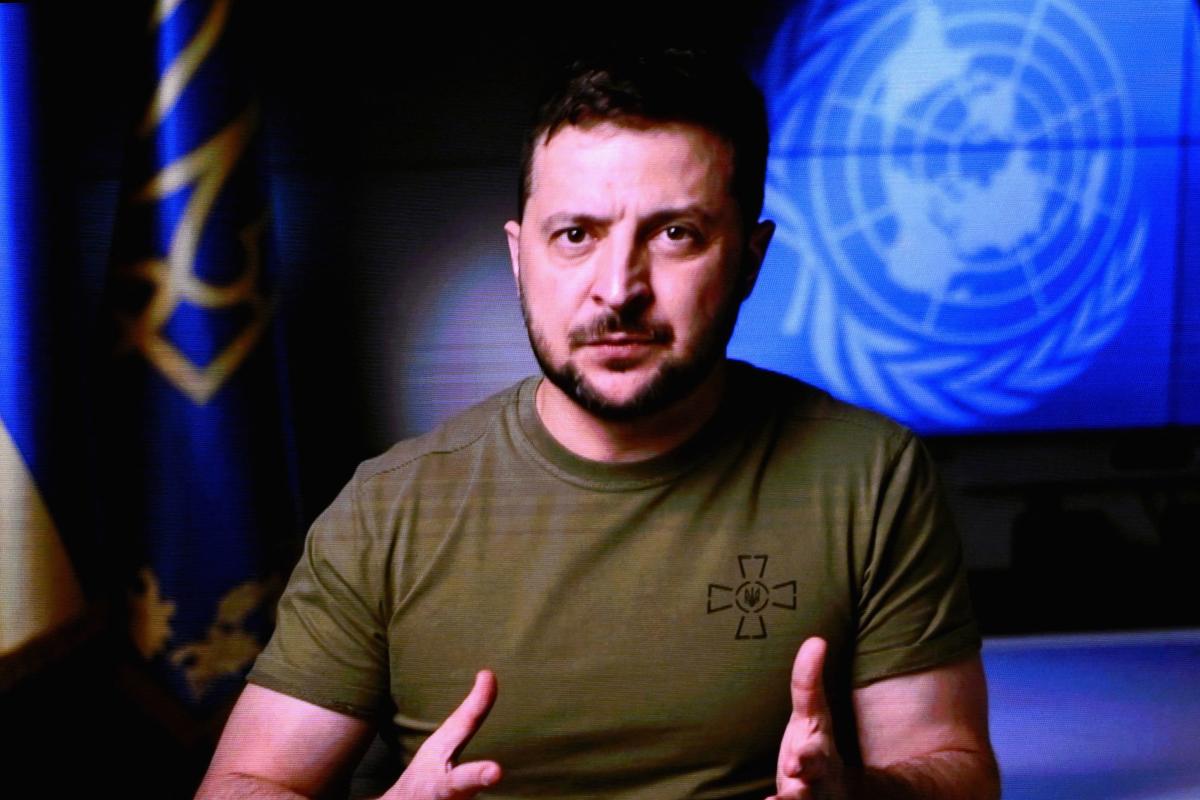 In a videotaped address Wednesday to the United Nations General Assembly, Ukrainian President Volodymyr Zelensky called on the world to punish Russia’s government for the war it launched against Ukraine earlier this year.

Only seven member states voted against allowing Zelensky to address the General Assembly via video feed, Ukraine’s president said: Russia, North Korea, Nicaragua, Cuba, Syria, Belarus and Eritrea. Again and again, Zelensky used his remarks to press the point that Russia must be held accountable for its decision to launch a preemptive war on its neighbor.

Punishing Russia, Zelensky said, was one plank of what he billed as a 5-point “formula for peace” to end the ongoing conflict. The other items in his plan included guarantees to protect life, the restoration of security measures and the reestablishment of Ukraine’s territorial integrity, future security guarantees as well as Ukraine’s unfettered “determination to defend one’s self.”

Specifically, Zelensky said that international punishment against Russia must be carried out until “the internationally recognized border [of Ukraine] is restored,” and “until the damages and losses of the war are fully compensated.” Until then, international sanctions against Moscow should continue, Zelensky said.

Russia should also be stripped of its right to vote or issue vetos as a permanent member of the U.N. Security Council, Zelensky said. He also took aim at some Russian citizens, like those who have continued to vacation in Crimea, which Russia annexed from Ukraine in 2014, as the war rages on just miles away.

“Citizens of the aggressor state [Russia] shouldn’t be allowed to enjoy tourism or shopping in the territory of those who value this,” Zelensky said, “but should be encouraged through visa restrictions to fight against the aggression of their own state.”

Zelensky noted that as the General Assembly was taking place, Ukraine’s military was continuing to uncover human remains from a mass grave in the recently liberated town of Izyum.

“The bodies of women and men, children and adults, civilians and soldiers were found there — 445 graves,” Zelensky said before recounting how a male victim was found to have been castrated prior to being killed.

“Ask, please, the representatives of Russia why the Russian military are so obsessed [sic] with castration,” Zelensky said. “What was done to them so that they want to do this to others?”

In a speech delivered before the assembly earlier in the day, President Joe Biden forcefully decried Russia’s invasion of Ukraine.

Weaponry provided by the United States and other NATO allies are credited with helping sway the momentum in the conflict toward Ukraine and Biden made clear that the U.S. would not back down in its opposition to Russian aggression. Still, Zelensky renewed his appeal for even more military hardware.

“For us, this is war for life. That is why we need defense support,” Zelensky said. “Weapons, military equipment and shells. Offensive weapons, and long-range ones, is enough to liberate our land. And defensive systems, above all air defense, and we need financial support to keep internal stability and fulfill social obligations to our people.”

In his own speech on Friday, Russian President Vladimir Putin announced a partial mobilization of 300,000 reservists to the military in order to try to stem recent military setbacks in Ukraine. He also accused the U.S. and Europe of “nuclear blackmail,” and issued a not-so-veiled threat to use nuclear weapons.

“The territorial integrity of our homeland, our independence and freedom will be ensured, I will emphasize this again, with all the means at our disposal,” Putin said. “And those who try to blackmail us with nuclear weapons should know that the prevailing winds can turn in their direction.”

But Zelensky also referenced an incident that occurred Monday in which Russian artillery shells exploded near the Pivdennoukrainsk Nuclear Power Plant in Ukraine’s southern Mykolaiv province, the latest act in the conflict that, Zelensky said, attested that Putin was the one who posed a global threat.

“On the eve of the General Assembly meeting, Russia fired missiles at a South Ukraine nuclear power plant. The explosion hit the station buildings. Windows were broken, walls were damaged. The rockets exploded only 300 meters from the walls of the reactors. And this is after the IAEA’s clear appeal to Russia to stop any hostile activity against any nuclear facilities of Ukraine,” Zelensky said, adding,”That makes all of you a target. Russian radiation blackmailing is something that should concern each and every one of you because none of you will find a vaccine against radiation sickness.”