I tried Martha Stewart’s trick for the ultimate grilled cheese, and I found a way to make it even better 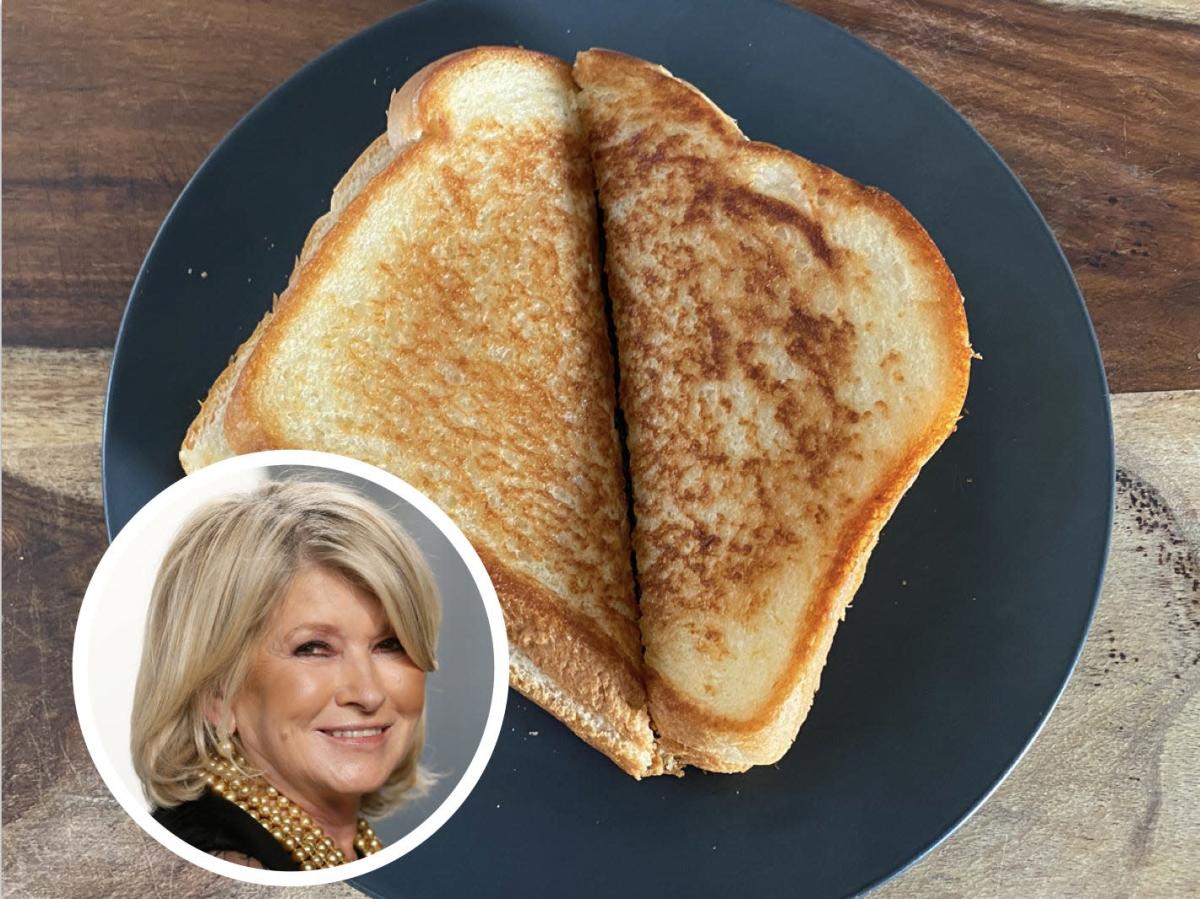 When I came across Martha Stewart’s favorite trick for the most delicious grilled cheese, I knew I had to give it a try.

I decided to test it back-to-back with a few other variations to see which one resulted in the best-tasting sandwich. To keep the comparisons simple, I went with classic white cheddar and white bread for each sandwich.

Here’s how the variations stacked up:

I first tested plain bread to get a better sense of how the other toppings would fare.Paige Bennett for Insider

To compare how butter and mayo change the exterior of a grilled cheese, I started by testing a sandwich with nothing spread across the outside of the bread.

I expected this version to be very dry.

It took a while, but the bread did get ever-so-slightly golden on the outside

It barely got any color even after cooking each side for five minutes.Paige Bennett for Insider

I shredded some cheddar cheese — I went with shredded instead of sliced for quicker melting — added it to the plain white bread, and put the sandwich on the griddle.

It took about five minutes on each side to get any sort of golden color.

The sandwich was predictably very dry, with a texture similar to Styrofoam.

The bread was so dry it scraped my mouth and tongue while I was trying to eat it, and the bite was hard to swallow.

Next, I tried making a grilled cheese with butter on both sides of each slice of bread

I usually make my grilled cheeses with butter.Paige Bennett for Insider

This is my usual method for making grilled cheese, so I expected the sandwich to be buttery and gooey inside and golden and lightly crisped on the outside.

I generously buttered each side of the bread and added the same amount of shredded cheese to the interior.

This grilled cheese looked delicious, but the crust was a bit too soft

The sandwich came off the griddle with a perfect, lightly golden exterior. I could see the inside was cheesy and soft.

The first bite of this sandwich was definitely a touch too soft and chewy inside, maybe because the dry sandwich was fresh on my mind

Because butter has a low smoking point, the bread became golden very quickly on this iteration. That meant that the cheese, although mostly melted, was still coagulated (semisolid), which threw the texture off.

Overall, though, this was delicious. The inside was gooey and the exterior was crispy.

Martha Stewart has said she likes to use mayonnaise instead of butter.Paige Bennett for Insider

I’ve tried Stewart’s “hack” — which she doesn’t claim as her own — before. But I’ve never noticed a difference in how it compares to my regular buttered version.

I was hoping to detect subtle differences by trying these different methods one after another.

The sandwich turned golden quickly, and the bread was bubbling on the griddle

The creamy condiment made the bread crisp up and bubble.Paige Bennett for Insider

Like the buttered sandwich, this bread turned a golden color in just a few minutes over medium heat. I noticed the condiment was bubbling along the bottom crust as it cooked.

After cooking it for a few minutes on each side, I sliced my sandwich and took a bite.

The flavor wasn’t really affected by the mayo, but the texture was noticeably different.

The crusts and exterior were crisper and more golden. But the cheese was not quite as soft and gooey as the sandwich that had butter on the inside.

Finally, I decided to combine the mayo and butter methods

I wanted to try a combo of the methods.Paige Bennett for Insider

I wanted to try to achieve a perfect texture: melty on the inside and crisp and crunchy on the outside.

To do this, I slathered the insides of the bread in butter and the exteriors in mayonnaise. I expected the best of both previous methods to come into play here.

The exterior mayo had the same golden-brown effect on the bread.Paige Bennett for Insider

I cooked the sandwich on the griddle, the same way as the others, and it browned just as fast, resulting in that perfect, golden bread.

I picked up a slice, and I could feel that the center was soft and squishy.

I enjoyed every bite of this version.

The exterior and edges were crisp and flavorful, and the interior was even softer with the extra butter on the bread.

I’ll definitely be using this creamy combo in the future

As long as I have both softened butter and mayonnaise on hand, this will be my new go-to way to make grilled cheese.

But if I wanted to add watery or soft toppings — like tomatoes, pickles, or avocado — I’d actually just go with Stewart’s hack sans butter to prevent the interior from becoming too soggy.

Want more cooking tips from Martha Stewart? Check out recipes and lessons from her cookbook for at-home chefs:

Like Loading...
Contents hide
1. I started by making a cheesy sandwich with nothing coating the bread
2. It took a while, but the bread did get ever-so-slightly golden on the outside
3. Next, I tried making a grilled cheese with butter on both sides of each slice of bread
4. This grilled cheese looked delicious, but the crust was a bit too soft
5. Now it was time to try Stewart’s trick of adding mayonnaise to the outside of the bread
6. The sandwich turned golden quickly, and the bread was bubbling on the griddle
7. Finally, I decided to combine the mayo and butter methods
8. The sandwich was ready in minutes and just as good as I expected
9. I’ll definitely be using this creamy combo in the future
9.1. Share this:
9.2. Like this: