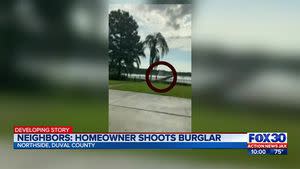 A homeowner who shot a man he says broke into his home spoke exclusively with Action News Jax Thursday.

Kerr says the man broke into his house Wednesday morning, threatened him, and stole $400 dollars.

The homeowner was not arrested.

Kerr’s wife was leaving for an appointment when Kerr says he went into his office.

“I got the door open about a foot, and I see this guy standing there. He’s got my rifle… BB rifle – he’s standing there with the rifle like this, the butt facing me, and he’s fixing to clock me … I quick-slammed the door, and I heard him messing with the other door in the room. So, I’m thinking, ‘oh, man, Tina’s out there in the car fixing to go.’ So, I ran through the kitchen, grabbed me a cleaver, and went out the door. By the time I went out the door, he’s already at the mailbox.”

Worried for his neighbors, Kerr says he followed the man down the street.

“I got a next-door neighbor with a little kid; the lady across the street is kind of elderly,” Kerr said.

At that point, the police were there. Kerr recalled pointing them in the man’s direction. Kerr then figured he’d continue down the road to make sure the man wouldn’t hurt anyone, he said.

“There’s a privacy fence in that lot. Well, I drive down a little bit, and I see him, and he’s broken off a piece of this privacy fence …’ Come on out … the police officers are driving up the street, they’ll be here in just a second,’” Kerr recalled saying. “When he gets up – he has this big stick – it’s probably three or four inches around and about three feet long. And he wields the stick, well I jump back … I had my gun, I tried to shoot him in his hands to get the stick out of his hands. About that time a police officer drives down the street, and I wave him down, I’m like, ‘he’s right here!’ And he tried to run, still.”

Another neighbor who saw the man before he entered Kerr’s house also called 911. That neighbor gave Action News Jax a video of the man walking up his dock, naked and muddy. He told Action News Jax he’d given the man a pair of shorts, water, and food before calling 911. But he said the man took off, heading toward Kerr’s house.

“He was jacked up on something. He was dirty as heck,” Kerr said. “The time he tried to ram me in there he was going, ‘wooo! Wooo!’ And even when he was swinging the stick, he was like ‘wooo!’ And his eyes were like golf balls.”

Police questioned Kerr on Wednesday and later released him that evening. Kerr says he claimed self-defense.

“If you are in imminent fear of death or great bodily harm, you can probably defend yourself and claim self-defense,” Carson said.

Carson says a self-defense argument can be difficult to prove.

“My advice would be, don’t follow people out of your house. Call law enforcement, and allow them to manage it. Because if you get involved there’s a possibility that you could ultimately be charged with manslaughter or even murder,” Carson added.

Kerr says he wishes the man would’ve just asked for help, saying he would’ve gladly given him the $400 dollars that he stole. Kerr says he hopes the man gets the help he needs.

“I hope the best for him. I don’t hope anything bad,” Kerr said. “It was a traumatic situation on both our part.”

On Wednesday, investigators said the man Kerr shot was in surgery. Action News Jax is still working to learn the man’s condition.