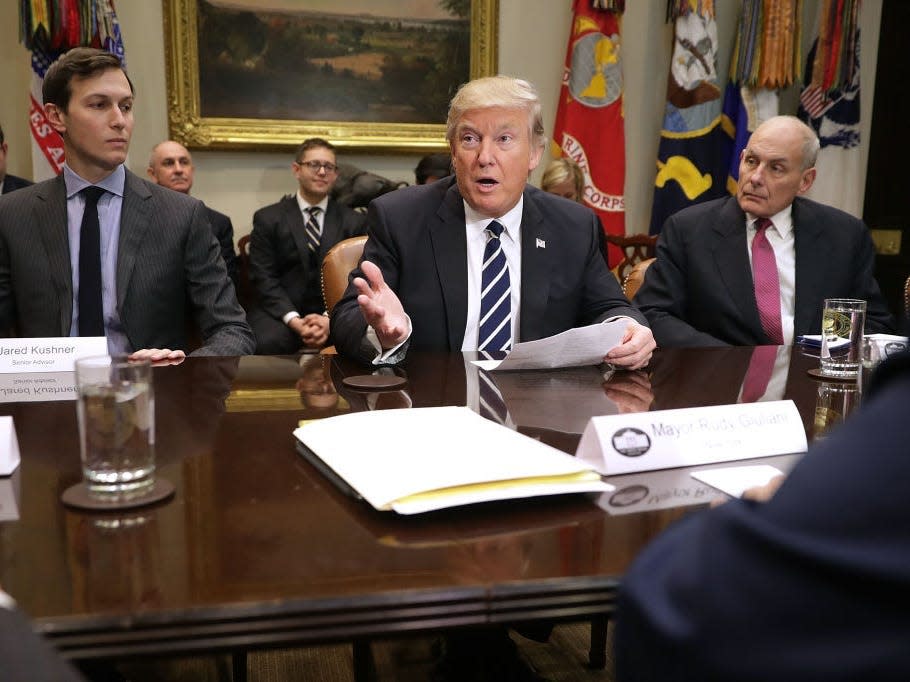 According to extracts of the book reported by The New York Post, Trump only found out that Kelly was listening in on his calls just before Kelly left the administration.

Per The Post, Kushner wrote in “Breaking History” that the eavesdropping was discussed on December 28, 2018, with Mick Mulvaney, who had by then been lined up as a replacement for Kelly.

“Before we departed, Mulvaney and I met with the president to discuss his upcoming schedule. Then Mulvaney handed Trump a document to sign,” Kushner said.

Mulvaney told Trump, according to the book, that “this will end the practice Kelly started of listening to all of your phone calls.”

Mulvaney “explain[ed] that Kelly had given himself the ability to listen surreptitiously to the president’s calls,” according to Kushner.

Kushner wrote that Trump was furious to hear that his calls had been eavesdropped.

“‘Kelly did what?’ the president asked, stunned at the invasion of privacy,” Kushner wrote.

Trump concluded: “End that immediately,” per the book.

When Kelly was recruited in 2017, analysts said he would seek to instill discipline into the chaos of the Trump administration.

According to reports at the time, he was one of the senior administration officials who saw it as his job to steer Trump and prevent him acting impulsively.

Kelly and Kushner had a fractious relationship when they worked together in the White House, with Kelly in March 2018 downgrading Kushner’s security clearance, effectively barring him from key meetings.

During the final months of Kelly’s time in the White House, his relationship with Trump deteriorated and they were barely on speaking terms, reports said.

Other portions of Kushner’s book have also been devoted to criticizing Kelly, including making the accusation that Kelly once shoved his wife, Ivanka Trump.

In an email to The Washington Post, Kelly rejected that allegation.

“It is inconceivable that I would EVER shove a woman. Inconceivable. Never happen,” Kelly wrote. Insider wasn’t able to contact Kelly for comment on the eavesdropping claim.