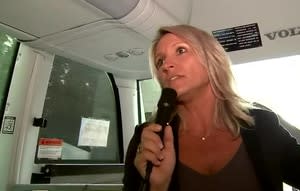 As a former strip club dancer, fighting to rescue girls and women from sex trafficking is personal for Kasey McClure.

That’s why on Thursday night she led the so-called “Unholy Tour” once again. It’s a bus tour meant to motivate those on board to take steps to save lives.

“So many people think that it’s not our problem, but it really is,” said McClure. “It’s not getting better. It’s getting worse.”

Thursday night, Channel 2 Action News was the only station to ride along on McClure’s tour of motels and strip clubs – places she believes are Atlanta’s sex trafficking hot spots in Gwinnett, Fulton and DeKalb counties.

“It’s a great way for them to feel the intensity and the atrociousness of what’s happening out here to women,” said Echols.

The tour comes just a month after 28 teens were rescued in Metro Atlanta during a national sex trafficking operation.

Echols hopes the tour will encourage those on board to help tackle the problem too.

“I really think it’s gotten worse because the traffickers didn’t really take off during the pandemic.”

Channel 2 Action News joined the same tour in 2015. Within days of our story, one local woman, who didn’t want to be identified, called the 4sarah hotline for help finding her missing granddaughter.

Using the granddaughter’s picture, intervention coordinator Anne Bailey found the 14-year-old on Backpage.com in an ad that listed her at 22. Police eventually rescued the girl and a friend.