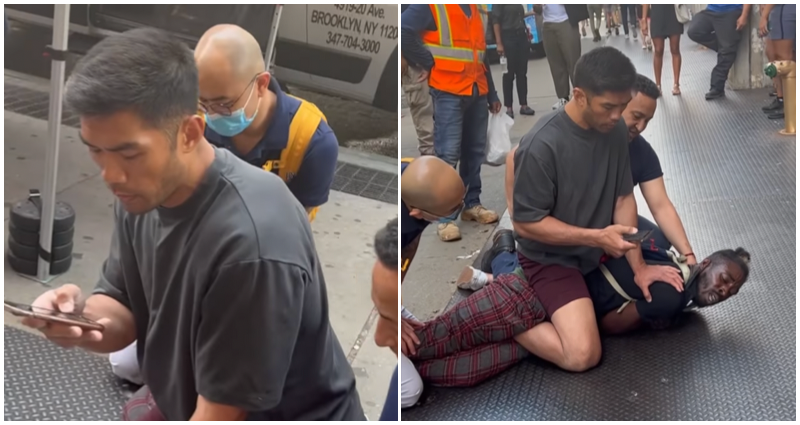 A Filipino American mixed martial artist reportedly stopped an attacker after witnessing him hit another man in an unprovoked attack in New York City.

Ro Malabanan, a black belt in Brazilian jiu-jitsu, was heading to work when saw a homeless man, later identified as 28-year-old Samuel Frazier, sucker-punch a construction worker in SoHo on July 27, according to reports.

Witnesses informed Malabanan that Frazier had also attacked other men before the construction worker, prompting the mixed martial arts (MMA) fighter to chase after the man.

“My jiu-jitsu instincts just kicked in. I jumped on his back,” Malabanan said in a video posted to his Instagram. “He tried to swing me off then, but a seatbelt position dragged him down to the floor, and I immediately took his back and pinned him to the ground.”

More from NextShark: Man who shoved Michelle Go to her death deemed unfit to stand trial

Frazier reportedly assaulted six men along Broadway. While he was pinned to the ground, some of his victims started attacking him, according to Malabanan. However, the MMA expert asked them to stop and call the police instead. He reportedly subdued the attacker until police arrived.

The New York Police Department eventually arrested the attacker, who has been charged with two counts of assault.

More from NextShark: Transgender activist attacked in San Francisco robbery attempt says she was targeted for being Hindu

Malabanan, who was born in the Philippines, migrated to the U.S. with his family when he was 9 years old. He currently studies jiu-jitsu and teaches boxing in New York. Malabanan said he turned to martial arts after previously experiencing harassment due to his race. He added that he is grateful he was able to use his training to stop an individual from harming other people.

“A lot of crazies out there right now in the streets so please be careful,” Malabanan said. “They will sucker-punch you they will take out their frustrations. It’s hot in New York right now so hot temperatures equal hotheads, and some people out there are just looking for a reason to just cause trouble.”

More from NextShark: Chinese man lured by fake job ad is held captive as ‘blood slave’ for months in Cambodia

Mar-a-Lago raided by FBI agents in Florida, according to former President Donald Trump