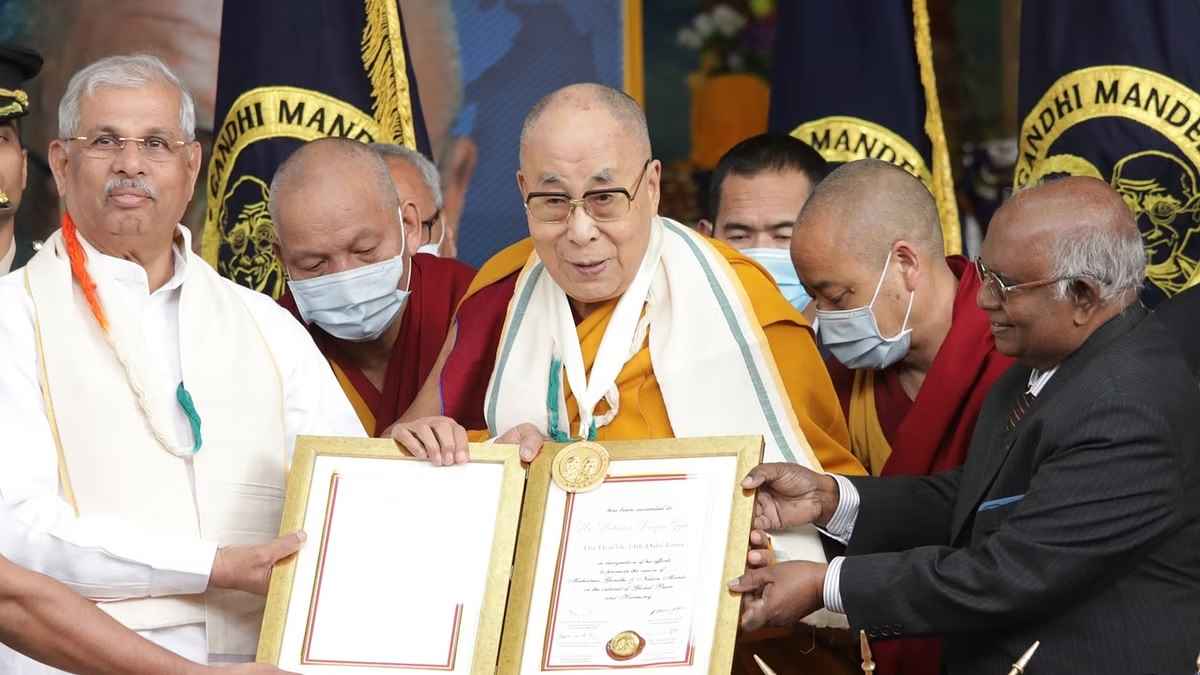 Gandhi Mandela Award: Tibetan Spiritual leader Dalai Lama was on November 19, 2022, awarded the ‘Peace Prize’ by the Gandhi Mandela Foundation. The religious leader was selected for the award in 2020, however, it could not be given to him because of the COVID-19 pandemic. Now with the situation normalizing, Gandhi Mandela Award was presented to the Dalai Lama by the Governor of Himachal Pradesh. Dalai Lama on receiving the award thanked the Foundation for the award and expressed his best wishes. The Tibetan Spiritual leader also emphasized kindness, unity, and non-violence in the world.

Governor Rajendra Vishwanath Arlekar presented the award to him at the event. pic.twitter.com/vLw9UqT1Gh

What is Gandhi Mandela Award?

The Gandhi Mandela Foundation, a Government of India registered trust, is a non-profit organization, formed with the motive to promote Mahatma Gandhi’s and the former President of South Africa Nelson Mandela’s values of non-violence.

Gandhi Mandela Foundation instituted the award on the 150th birth anniversary of the Father of the Nation, MK Gandhi.

Gandhi Mandela Award is given to the personalities who have carried forward the legacies of Gandhi and Mandela by making significant contributions in the fields of social welfare, peace, Environment, Culture, Education, Healthcare, Sports, and Innovation.

Why Dalai Lama was selected for Gandhi Mandela Award?

Gandhi Mandela Award is conferred to the most deserving ambassador for peace. Dalai Lama is hailed globally for his efforts to promote peace and stability and to solve every problem with war.

Dalai Lama had turned savior for the larger community and the award will inspire the younger generation to follow his teachings.

While thanking the Gandhi Mandela Foundation for the honour, Dalai Lama said that non-violence and compassion were essential for world peace and added that these principles are ingrained in the Indian culture.

The 14th Dalai Lama is the highest Spiritual leader of the Tibetans and the former Head of State.

Dalai Lama in 1959 had fled Lhasa after the Chinese troops marched into the erstwhile capital of the then-Independent state of Tibet. The exiled leader has been living in Dharamshala, India where he set up a self-styled Tibetan Government in exile known as the Central Tibetan Association.

Dalai Lama has been pushing for greater autonomy for the Chinese-controlled Tibetan autonomous region since. He has also been the recipient of the 1989 Nobel Peace Prize.

India’s first National Centre of Excellence for Green Port & Shipping launched- All you need to know!

घर से नाबालिग को बुलाकर ले गए, मां-बाप का इकलौता बेटा था | Brutal murder of teenager in Patna… Throat and private part cut, Called from home, was made a witness in the murder, assault case; was the only son of the parents