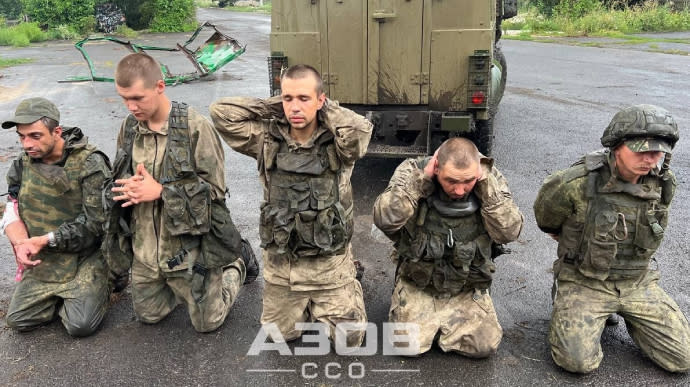 Source: Andrii Biletskyi, the founder and first commander of the Azov Regiment, on Telegram

Quote: “Here are the latest five prisoners captured by the Azov Special Operations Regiment. They include: a drug addict, an officer, an Ossetian, a ‘descendant of the Cossacks’, and a mobilised resident of the ‘DPR’ [the self-proclaimed Donetsk People’s Republic].

Note: these animals are alive, they haven’t been beaten or crippled. They will eat well and sleep well and be treated by Ukrainian doctors while they are waiting to be exchanged.

It is the code of honour of any soldier, mandatory for any member of Azov: no matter what kind of scum you have to deal with, you still have to treat prisoners right. We don’t violate this code, even after the mass murder of our fellow soldiers in Olenivka.

Details: Biletskyi stressed that apart from that, this also makes it possible to exchange them for Ukrainian soldiers.

Journalists fight on their own frontline. Become our patron, support our work!