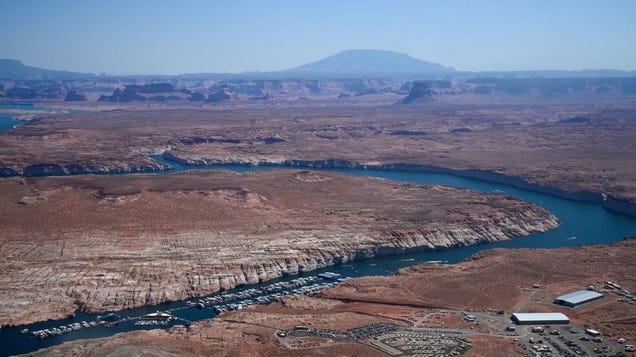 A group of agencies that provide water to millions of customers in the western U.S. has agreed to rip-up grass lawns in public spaces across multiple states as part of an effort to reduce water usage as the Colorado River continues to suffer from a major drought.

More than 30 agencies that draw water from the river signed on to the conservation agreement last week. The pledge promises to remove 30% of grass lawns and replace them with “drought- and climate-resilient landscaping while maintaining vital urban landscapes and tree canopies,” that benefit communities and wildlife. The agencies will remove the many well-manicured lawns seen throughout parking lots, neighborhood entryways, and highway medians.

Though seemingly harmless, grass lawns use up a lot of water. A 2016 study co-authored by NASA scientists emphasized that grass that grows in arid states (like California, for example) could be responsible for up to 75% of a household’s water consumption. Agencies like the Southern Nevada Water Authority have incentivized property owners to swap grass lawns with plants that soak up a lot less water, like drip-irrigated trees.

“Replacing this grass with drip-irrigated trees and plants will save about 9.5 billion gallons of water, which is about 10% of our community’s total water allocation from Lake Mead/Colorado River,” a spokesperson for the Southern Nevada Water Authority told Earther in an email.

So far the commitment is a little light on details. The agencies promised to expand water recycling efforts, though they didn’t explain how. The agreement also failed to mention how the regional agricultural industry will lower its water use, though it did acknowledge that cities don’t use up most of the water coming out of the river. Urban areas use about one-fifth of the water sourced from the Colorado River, while agriculture takes up the rest, the Associated Press reported. “Cities—the 20% —can’t solve the math problem. But we can certainly contribute to solving the problem,” John Entsminger, the Southern Nevada Water Authority’s general manager, said according to the Associated Press.

Communities out west are already feeling the ripple effects of some recent water conservation efforts. A small town of 500 people near the Rio Verde foothills in Arizona may be without water by the end of this year. The town doesn’t have its own water and has sourced it from nearby Scottsdale. But late last year, Scottsdale announced that it would stop transporting water to the town by 2023. City officials cited the Colorado River water shortages for the cutoff. Scottsdale sources about 65% of its water from the river and officials are trying to lower reduce usage by ceasing water deliveries to the small town.

If the region doesn’t continue to reduce water usage from the Colorado River, major reservoirs like Lake Powell and Lake Mead could dry up in just three years. And it doesn’t look like the country’s water woes are going away anytime soon. Just last month, the National Oceanic and Atmospheric Administration announced that the U.S. is in for another super dry winter. Almost all of California, Nevada, and Utah are expected to continue experiencing drier-than-average conditions, and lower-than-average precipitation.