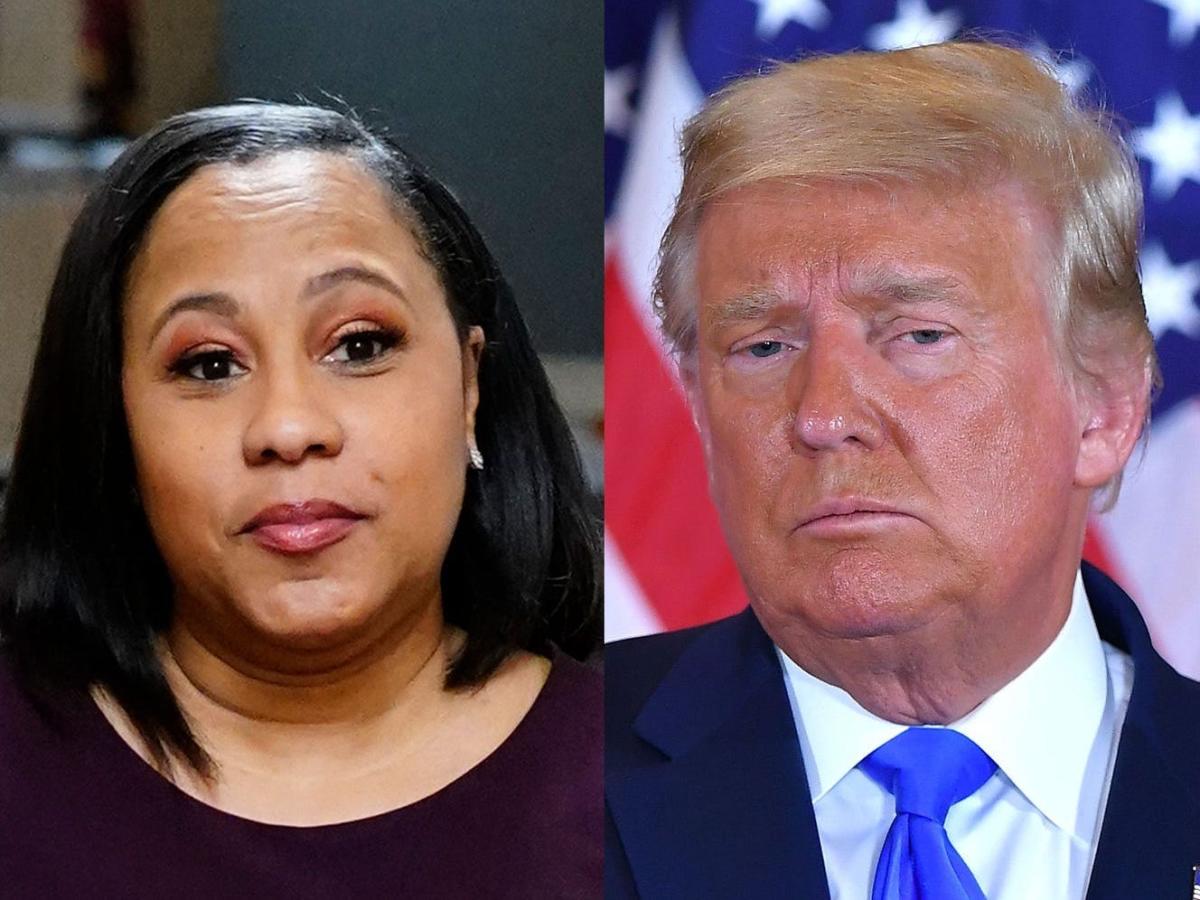 In an Atlanta courthouse, Fulton County District Attorney Fani Willis said the report, from a special grand jury, should not be released “at this time.” She said its release might impact the rights of multiple defendants if her office brings criminal charges.

“The state understands the media’s inquiry and the world’s interest, but we have to be mindful of protecting future defendants’ rights,” Willis said.

McBurney dissolved the special grand jury earlier this month. Since May 2022, it had been hearing evidence brought by the Fulton County district attorney’s office. The grand jury’s charter gave it the authority to investigate “the possibility of criminal interference in the 2020 general election.”

The jurors voted to make the report public and, by law, it’s supposed to be published. McBurney’s hearing Tuesday is over whether the report met the appropriate legal standards for publication. A group of media organizations has intervened in the case, asking for it to be made public as soon as possible.

“Unresolved is the question of whether the special purpose grand jury’s final report constitutes presentment,” which would be made public, McBurney wrote in a court order earlier in January.

Fulton County District Attorney Fani Willis has not said whether she will refer the report to an ordinary grand jury, which has the power to bring criminal charges. Such a jury would likely move quickly. They typically sit for a maximum of two months, and would review the deposition transcripts and other evidence already gathered by the special grand jury.

Willis said Tuesday that “decisions are imminent” in the case.

McBurney appeared skeptical that he had any authority to keep the report private. He pointed out that the district attorney’s office, witnesses, and jurors themselves were all free to talk about the report’s contents. Refusing to publish it, he said, would be an additional gag on a subject of great public interest.

It’s the DA’s investigation, but it’s up to the judge

Willis’s plans could have great sway over the timing of when the report may be released, according to Ronald L. Carlson, a professor at the University of Georgia School of Law. Her statements and court filings also shaped public knowledge of the special grand jury’s activities.

“As for her timing respecting any potential referral by the DA to a regular grand jury, that could be the subject of an announcement by her,” Carlson told Insider. “That was the approach when she initiated the special grand jury last year.”

The investigation was initiated after then-President Donald Trump — who lost Georgia’s electoral college votes along with the rest of the 2020 presidential election — tried to overturn his loss. He asked Georgia’s secretary of state, Brad Raffensperger, along with other state officials to “find” votes that would eliminate now-Presidet Joe Biden’s margin of victory.

The special grand jury’s role also includes investigating efforts by other officials, including those involved in a scheme to have fake electors falsely certify votes in Trump’s favor on January 6, 2021, in Washington, DC.

Willis has fought court battles to ensure testimony from a parade of high-profile Republicans involved in the machinations trying to overturn the election, including Mark Meadows, Trump’s chief-of-staff at the time; Gov. Brian Kemp; the state’s Republican Party chairman, David Shafer; Sen. Lindsey Graham of South Carolina; and more than a dozen others who spoke with Trump at the time. The case had 75 witnesses overall, Willis said Tuesday.

At the end of the hearing Tuesday, McBurney said he would “think about this a little bit” and accept additional documentation from the district attorney’s office and the media organizations before making a decision about releasing the report.

The release could be delayed, or it could be released with redactions

An analysis from the Brookings Institution found that Trump and the fake electors could face charges of election fraud, improperly trying to influence government officials, and criminal solicitation.

In a statement Monday, attorneys representing Trump said they assumed the special grand jury “concluded there were no violations of the law by President Trump.”

Norm Eisen, a co-author of the Brookings analysis and ethics expert, told Insider that releasing the report could complicate the charging decision for Willis. She may not want it released until a regular grand jury hears evidence and decides whether to bring indictments, he told Insider.

“It can lead to identifying witnesses, and to potential targets or defendants talking to those witnesses. Even if benign, that’s a problem,” Eisen said.

McBurney said Tuesday that he would give some latitude to the district attorney’s considerations about timing. A member of Willis’ team said she would not want the report to be kept private “forever.”

“I appreciate that I could do things to help maintain the investigation and not get it prematurely derailed by things that you ought not to have to deal with until the time is right,” McBurney said. “And that’s a decision that the district attorney and her team would make as to when the time is right. I that’s an important interest to uphold. You’ve got my full support of that interest.”

Eisen pointed out that Trump has a habit of pressuring people not to work against his interests in courts and criminal investigations.

“There were allegations, for example, in the January 6th investigation that perhaps some of those in Trumpworld may have been seeking to may or may not have been seeking to influence witnesses,” Eisen told Insider. “And certainly, Donald Trump has engaged in that kind of conduct before — Robert Mueller identified some in his report and more generally identified 10 instances of possible obstruction of justice.”

It’s also possible we may see the report released with some redactions. Carlson predicted the judge would move swiftly to have it made public.

“We will see it promptly because media interest is high and there is precedent for release of such documents,” Carlson said. “However, there could be some redactions. This would be for material which could arguably fall within attorney client or executive privilege.”

If Willis brings a criminal indictment against Trump, it would be the first to land amid several ongoing criminal investigations. The Manhattan district attorney’s office is also investigating his company’s finances, as well as whether he broke campaign finance laws in arranging hush-money payments ahead of the 2016 election for women who said they had affairs with him.

Special Counsel Jack Smith, appointed by Attorney General Merrick Garland, is overseeing a criminal investigation into Trump holding onto government documents once he left the presidency. Smith’s team is also examining the plot to have fake electors overturn Biden’s victory in the 2020 election.

In addition to the criminal cases, Trump has a court docket full of civil cases marching forward before the 2024 election. Later this year, he’s scheduled to go to trial for cases brought by the writer E. Jean Carroll, who alleges he raped her in the 1990s, and the New York attorney general’s office, which claims his company has participated in decades-long financial fraud.