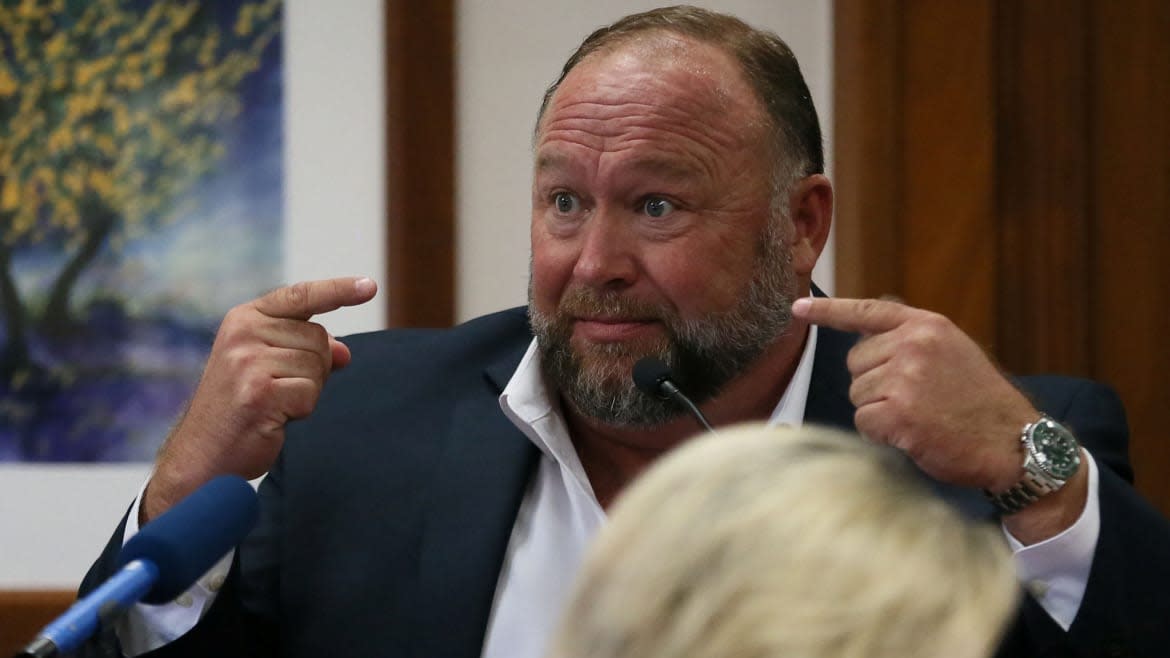 The Texas jury that conspiracy theorist and InfoWars founder Alex Jones publicly referred to as “extremely blue collar folks” who “don’t know what planet they’re on,” found the online pseudo-celeb liable on Thursday to the tune of $4.11 million for spreading lies about the Sandy Hook school shooting.

The verdict means Jones now must pay damages for defamation and intentional infliction of emotional distress to the mother and father of Jesse Lewis, a 6-year-old boy killed in the 2012 massacre. After Jones insisted repeatedly on his show that the attack was a so-called false flag meant to gin up support for stricter gun control laws, the late child’s parents were subjected to years of abuse and harassment from InfoWars fans.

Jones said on the stand Wednesday that any award “above $2 million will sink” him and InfoWars. (This spring, an unidentified donor reportedly gifted Jones some $8 million in Bitcoin.)

Jurors will consider punitive damages, which cannot exceed 10 times compensatory damages, against Jones and his company on Friday.

“I had seen so many other things in history that had been staged, so it made me question it,” Jones testified in an attempt to explain why he claimed Sandy Hook never happened. “When you’re a hammer, everything looks like a nail.”

Andino Reynal, the attorney representing Jones, had asked the jury to cap the damages at $8. But Lewis’ parents Neil Heslin and Scarlett Lewis said they believed Jones would only stop spreading falsehoods if he was hit where it hurt the most. They had asked for damages of $150 million.

“I can’t even describe the last nine and a half years, the living hell that I and others have had to endure because of the recklessness and negligence of Alex Jones,” Heslin said on the stand.

In her own emotional testimony, Lewis said, “I know there are hoaxes out there, but this is an incredibly real event. I lived it.”

During the seven-day trial, Jones was dealt numerous setbacks by Heslin and Lewis’s laywers.

On Wednesday, the second and final day of Jones’ testimony, their lawyer Mark Bankston shocked the courtroom with what a visibly stunned Jones called “your Perry Mason moment.”

Previously, Jones testified under oath that he had turned over all relevant evidence during the discovery process, including searching his phone for any text messages related to Sandy Hook. He found none on the device, Jones insisted.

But Jones appeared dumbfounded when Bankston said he had proof Jones hadn’t been telling the truth.

“Did you know that 12 days ago, your attorney messed up and sent me a digital copy of your entire cell phone, with every text message you have sent for the past two years?” Bankston asked. “And when informed, [they] did not take any steps to identify it as privileged, or protected in any way?”

Bankston continued to pummel Jones, emphasizing that he had said, in his sworn testimony, that he never sent a single text message about Sandy Hook.

To this, Bankston said, “You know what perjury is, right?”

On Jones’ show Wednesday night, he slammed his “damn lawyers” for the catastrophic error.

Jones had also testified that he never used email, explaining why he hadn’t provided any of the communications Bankston and his co-counsel, Kyle Farrar, had requested. Yet, he was uncharacteristically subdued when Bankston displayed Jones’ own emails to the jury—which were also on the phone data mistakenly sent to him.

“You’d agree these are emails you sent to your lawyers, your staff, and others, concerning your business operations, Sandy Hook, [and] other topics… ?” Banks asked Jones, who said simply, “This is ridiculous.”

In an emergency motion filed Thursday, Jones tried, but failed, to get the cellphone evidence thrown out of court and have a mistrial declared.

Jones, whose company, Free Speech Systems, filed for bankruptcy last Friday, testified on Wednesday that InfoWars sometimes grossed up to $800,000 a day. He also finally conceded that Sandy Hook was not a staged event using “crisis actors,” but a “100 percent real” mass shooting that in fact destroyed dozens of lives.

Thursday’s decision was the first of three in which juries are considering damages against Jones after Judge Maya Guerra Gamble found him in default last year for what she described as “flagrant bad faith and callous disregard” of the court’s orders during discovery. The following month, a Connecticut judge also found Jones in default, for identical reasons.

A frequently fed-up-seeming Gamble repeatedly admonished Jones in court over the past week, for not taking the proceedings seriously. At various points, she was forced to deal with him like a schoolboy, instructing him to spit out his gum, to wait his turn to speak, and to tell the truth.

“This is not your show,” Gamble told Jones at one point. “Your beliefs do not make something true. You are under oath.”

Alex Jones Gets Scolded During Really Crappy Day in Court

Things became so heated during the proceedings that lawyers for both sides reportedly almost got into a physical altercation.

During cross-examination, Bankston played a recent segment from Jones’ show, in which he denigrated the jury that had been seated in the case. The men and women judging him were “extremely blue-collar folks,” half of whom do “not know who I am,” he told viewers.

Jurors then sent a note to Jones via courtroom officials, with one asking, “Are you aware that this jury consists of 16 intelligent, fair-minded citizens who are not being improperly influenced in any way?”

In Jones’ defense, Reynal had argued that Heslin and Lewis hadn’t shown actual proof of damages, and claimed Jones had been unfairly maligned by the media. From the outset, Jones has framed the case as an attack on his First Amendment rights—though his lawyers had to be reminded by Gamble that jurors were only there to assess damages because Jones had defaulted on his right to go to trial over his First Amendment right to make false statements.

“Do you want to choose what you get to watch and listen to or do you want a plaintiff’s attorney to decide for you?” Reynal asked the jury during closing arguments on Wednesday, bizarrely invoking a Holocaust-era poem as his client, who has pushed countless anti-Semitic conspiracies on his show, looked on.

According to Reynal, Jones “made a terrible mistake,” he said in his closing arguments. “That mistake was weaponized by the same political forces that had descended upon Sandy Hook when it happened.”

Austin-based trial lawyer Holly Davis, who assisted Bankston and Farrar in the case, said in an emailed statement that Jones has thumbed his nose at the legal system throughout the trial.

“The irony should not be lost on this jury that this entire trial is about consequences for lies told to the public,” Davis said. “The fact that lies may have been told to the jury who can hand out a consequence to the teller of the lie is the beauty of the judicial system.”