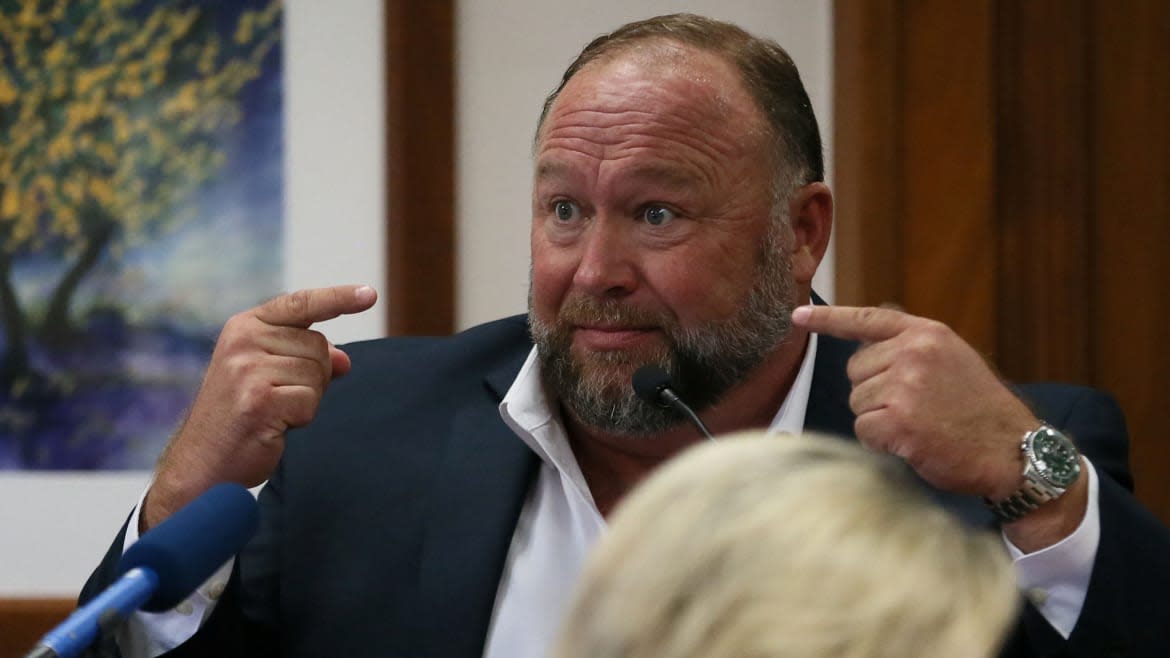 A day after far-right conspiracy-monger Alex Jones was scolded by a judge for chewing gum in the courtroom, opposing lawyers dropped a bombshell revelation they said proved the embattled InfoWars host has been lying on the stand.

Jones testified on Wednesday for the second time in attempting to fend off one of many defamation lawsuits brought by families affected by the Sandy Hook massacre. They are seeking at least $150 million from Jones and his bankrupt media company, Free Speech Systems. Numerous parents of children killed in the 2012 school shooting blame Jones for spreading falsehoods and disinformation about the tragedy that brought on ceaseless abuse, harassment, and death threats.

On Tuesday, Jones insisted, under oath, that he had fully complied with the court’s discovery process, and that there were no text messages on his phone in which he discussed Sandy Hook, as the other side had requested.

On Wednesday, attorney Mark Bankston informed a seemingly stunned Jones that he had evidence this was untrue.

“Did you know [that] 12 days ago your attorneys messed up and sent me an entire digital copy of your entire cell phone, with every text message you’ve sent for the past two years?” he asked. “And when informed, [they] did not take any steps to identify it as privileged?”

Bankston continued, “In discovery, you were asked if you had Sandy Hook text messages on your phone, and you said, ‘No,’ correct?” Bankston asked. “You said that under oath.”

“You know what perjury is, right?” Bankston shot back. “You testified under oath that you personally searched your phone for the phrase ‘Sandy Hook,’ and [said] there were no messages…You lied.”

Alex Jones Gets Scolded During Really Crappy Day in Court

Previously, Jones testified that he didn’t use email so he would not be providing any during discovery. However, Bankston stunned Jones again on Wednesday by displaying his own emails as evidence—which also came from Jones’ phone.

“You’d agree these are emails you sent to your lawyers, your staff, and others, concerning your business operations, Sandy Hook, [and] other topics… ?”

Jones responded, “This is ridiculous.”

Jones testified on Wednesday that InfoWars regularly brought in as much as $200,000 a day, and that it grossed as much as $800,000 a day at times. The exchange came after Bankston mentioned Jones’ claims that his income had virtually disappeared in recent years.

Jones also said that he “was planning to shut down [InfoWars]” when he got married several years ago, but that he “got stuck in his fight with the system, and everything else that’s going on.”

When Bankston asked Jones if he remembered saying on his show that the mass shooting at Marjorie Stoneman Douglas High School in Parkland, Florida, was a “false flag engineered to start a civil war,” he answered, “I said I believed it could be.”

“Now, a lot of people have questions about Vegas,” said Jones.

“Would you agree with me that there is not a mass tragedy, mass bombing, mass shooting, that has occurred in America in the past 15 years, that you have not attached the words ‘false flag’ to?” asked Bankston.

Bankston then played footage of Jones calling Sandy Hook a concocted scheme by the government.

“Sandy Hook [was] ‘synthetic,’ completely fake, with actors, in my view,” Jones said in the clip. “Manufactured. I couldn’t believe it at first. I knew they had actors, they are clearly, but I thought they killed some real kids. And it just shows how bold they are, that they clearly used actors, I mean, they even ended up using photos of kids killed in mass shootings… in a fake mass shooting in Turkey. Or, uh, Pakistan.”

On Tuesday, the jury heard heartbreaking testimony from Neil Heslin, whose 6-year-old son, Jesse, was killed in the Sandy Hook shooting.

“I can’t even describe the last nine and a half years, the living hell that I and others have had to endure because of the recklessness and negligence of Alex Jones,” Heslin said in court.

Jones did not show up for Heslin’s testimony, which the grieving father called “cowardly.”

“Today is very important to me and it’s been a long time coming… to face Alex Jones for what he said and did to me. To restore the honor and legacy of my son,” he told the Associated Press.

Jones has in the past denigrated Heslin as being “like somebody on the spectrum,” and said he and Jesse’s mom, Scarlett Lewis, were “caricatures of what you would imagine in some alternate universe of dwarf goblins.”

The lawsuit against him is a First Amendment issue, according to Jones, who has baselessly accused the trial of being rigged.

“All I did was speculate and ask questions,” he seethed to reporters outside the courthouse on Tuesday. “I have a right to do that.”

Got a tip? Send it to The Daily Beast here