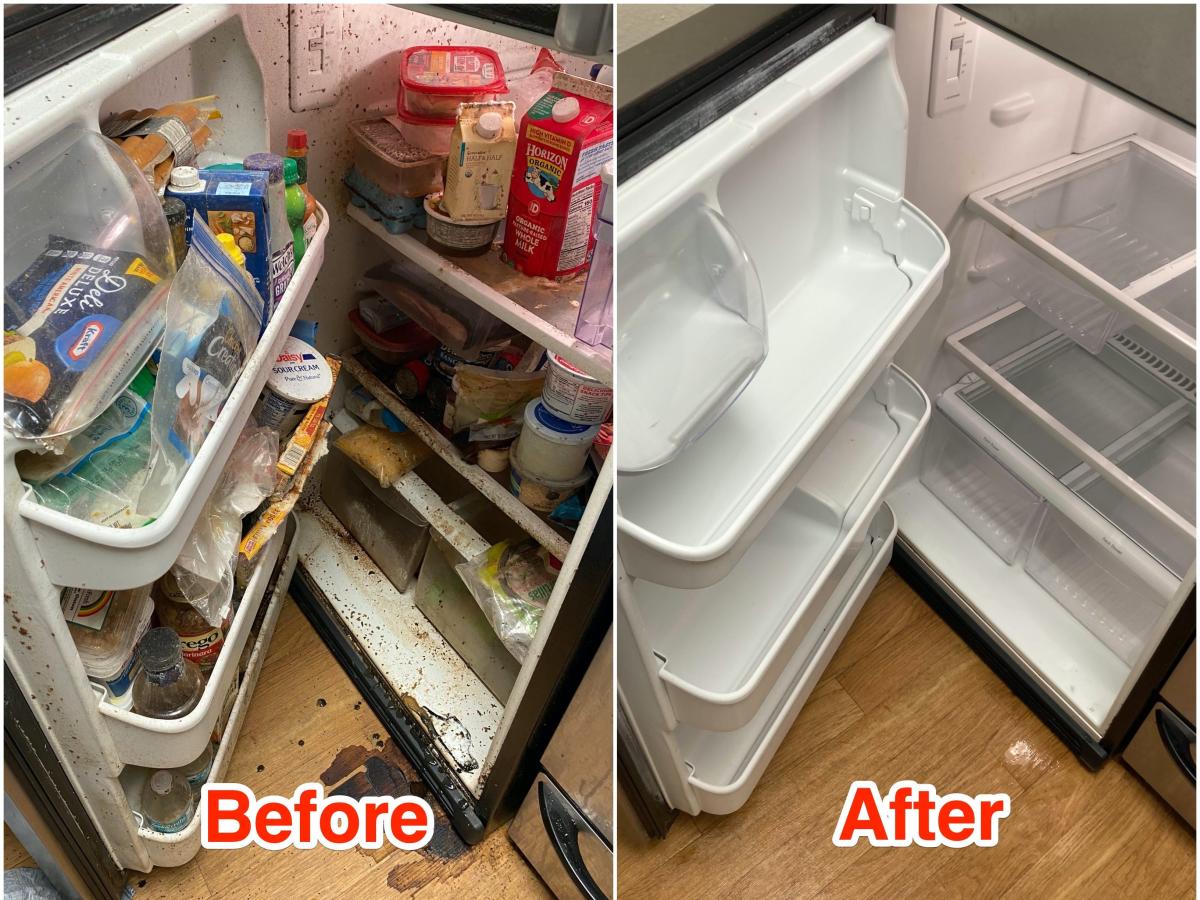 Fiona Mills is a former hoarding technician for Spaulding Decon, a nationwide company that offers biohazard cleaning services including crime-scene and meth-lab cleanups.

Among the Spaulding Decon crew is Fiona Mills, a former hoarding technician and current franchise business consultant joined the company in 2018.

Spaulding Decon has chronicled a number of its cleanups on TikTok, where it shared its first video in July 2020 and has 4.3 million followers as of Wednesday.

Mills, 33, told Insider her favorite tips and hacks to clean the filthiest messes.

Mills uses her go-to formula for cleaning appliances like refrigerators.

“It’s a heavy degreaser. Honestly, I would recommend it for anyone,” Mills said, adding that she learned about TSP while growing up with her father. “I tell all the franchisees, ‘You need this on your van.’ It takes away half the elbow grease that you put into cleaning.”

Mills suggested mixing ¼ TSP with ¾ hot water and a disinfectant for the average mess. Areas with heavy buildup can require 50% TSP and 50% hot water. Add bleach when needed.

Homeowners can purchase a $10 TSP powder on Amazon or a $6.97 liquid TSP spray at Home Depot.

While refrigerators are the easiest, Mills said bathtubs and toilets are “the absolute worst.”

Mills told Insider that toilets could be particularly challenging due to calcium buildup and rust stains.

“I’ve seen some toilets so bad we just had to remove them,” Mills said. “At its worst, I’ve probably scrubbed a toilet for about two to three hours.”

Mills, who advised to wear gloves while cleaning, said using hot water, Mills’ TSP formula, in addition to a pumice stone, will cut through the muck.

“Just make sure the stone is wet,” Mills said. “I will scrub up and down one way, then I come back at it and I go sideways.”

The secret to a sparkling sink are coffee filters, Mills said.

One of the most common mistakes Mills noticed with stainless steel sinks is that people don’t let the cleaning solution soak prior to scrubbing out the sink.

“You can’t just spray and scrub. You need to let those chemicals work,” Mills said. “Whatever chemical you’re using, you have to give it a chance to eat at the buildup.”

Mills uses a large bristle pad alongside the TSP formula, bleach, and hot water to get rid of grime. Once the sink has dried, she goes back in to dry the surface with a coffee filter to make it “super shiny.”

Mills said that using charcoal or white vinegar airs out stinky odors that linger in the home.

While Spaulding Decon uses an ozone machine to kill odors, the average person can use ingredients from their kitchen cabinet.

“You can put white vinegar on the stove and let it boil for a little while. It’s going to stink, obviously, but give it about an hour or so and it will neutralize the air,” Mills said, adding that people can include orange peels to give an additional citrus scent.

She also noted that charcoal pouches, available for $16.95 on Amazon, help because charcoal reduces odor.

From food to bloodstains, carpet can be tricky to clean without the proper disinfectants.

Most clients want their carpets entirely removed by the time they call Spaulding Decon, but there are some solutions to persistent stains.

Mills pointed to a heavy-duty, multipurpose cleaner called Shockwave, which regular homeowners can mix with hot water or a disinfectant to clean areas of their home. Amazon sells a one-gallon bottle of Shockwave for $33.99.

The Pink Stuff Miracle Cleaning Paste, selling for $5.97 on Amazon, is also a great tool to use with carpets and other surfaces.

Technicians at Spaulding Decon have tackled their fair share of blood-stained carpets, which Mills said can be cleared out with hydrogen peroxide. However, most people are approaching bloodstains wrong.

“The biggest problem is people usually put hydrogen peroxide and then they scrub,” Mills said. “That’s the worst thing you can do because when you scrub it, you’re actually pushing it further down, and it’s penetrating deeper.”

She advised that people should instead apply the hydrogen peroxide, then lightly “agitate” it until it foams up. Afterward, dab it with a towel or brush to get the stain out.

Insider’s Megan Willett-Wei reported that common things like handles, faucets, and light switches are actually dirtier than a toilet seat — so don’t forget to give them an extra scrub.

“Those areas are disgusting because your hands are dirty when you turn them on, and then the handle is still dirty afterward,” Mills said.

Mills suggested people use Shockwave, a disinfectant like Lysol, or Microban 24, which she said is “mainly used for mold but does have a general multi-surface cleaner.”

She also suggested Microban 24’s Sanitizing Spray and Multi-Purpose Cleaner. These products sell for $6.41 and $4.14 on Amazon, respectively.