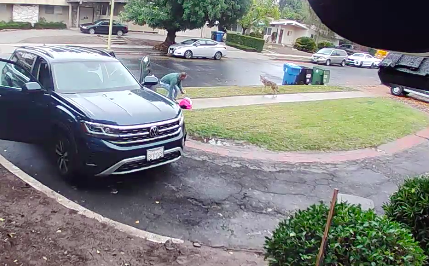 Jarring surveillance video showed a two-year-old girl being attacked by a coyote in broad daylight Friday on the front lawn of a home in Los Angeles. The girl survived and is recovering.

The attack, which took place in the Woodland Hills neighborhood, was caught on the family’s Ring camera system.

In the video, the family appears to be getting out of their car when a coyote approaches the girl on the front lawn and begins to drag her by her legs, prompting the toddler to scream. When the girl’s father approaches, the coyote lets go of the girl and backs off.

“I just wanted to make sure she was OK,” the girl’s mother, Shira Eliyaheo, told CBS Los Angeles.

The video shows the girl’s father throwing a rock at the animal.

“I grabbed her and laid her down,” Eliyaheo said. “I saw blood on her pants and on her leg and where she got injured. It was just terrible.”

Eliyaheo told CBSLA that her daughter was taken to a hospital for treatment, where she received a series of rabies shots and is recovering.

A spokesperson for the California Department of Fish and Wildlife (CDFW) told CBSLA Saturday that, prior to the attack, it had received several reports about an aggressive coyote in the neighborhood from area residents. It was working to get a DNA sample of the coyote from the girl’s clothing.

CDFW staff were also on standby in the area with dart guns if another sighting is reported, the spokesperson said.

There have been several coyote attacks in the Southern California area this year. In April, another 2-year-old girl was attacked by a coyote on a beach in the city of Huntington Beach. Responding police officers then shot and killed two coyotes in the area, and CDFW biologists used DNA samples to confirm that one of those two coyotes had attacked the girl. She suffered serious injuries, but survived.

In June, a coyote attacked a 2-year-old girl in a park in the Orange County city of Fountain Valley. That girl survived as well.