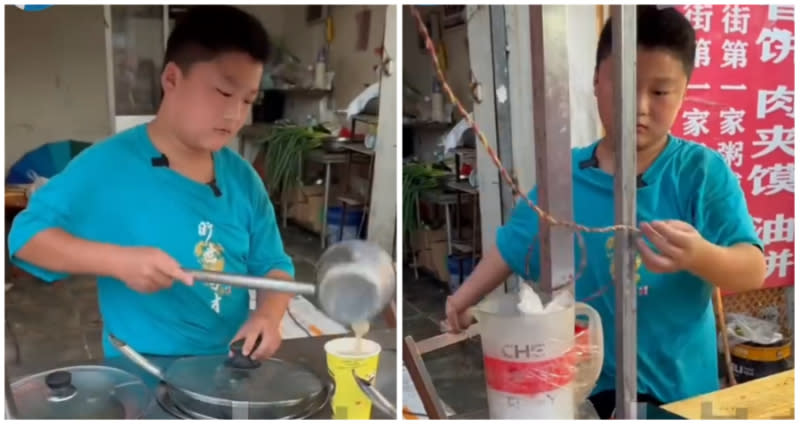 To help his single father during summer break, an 11-year-old boy dedicates up to 17 hours a day helping run multiple food stands in eastern China.

The boy, who resides in Zaozhuang city, Shandong province, has been spending his summer break helping his father run three food stands from early in the morning to late at night. While his father cooks, the boy sells various food items, including shredded pancakes, soy sauce pancakes and porridges, reported Henan Broadcasting System.

In a video uploaded to Weibo on Wednesday, the boy slices the pancakes and swiftly packages them into plastic bags while simultaneously preparing other food items. When asked how long he works at the food stand each day, the boy stated: “If I get up earlier, I will start at 7 or 8 a.m., otherwise I can postpone to 8 or 9 a.m. I will finish it by 11 p.m. or midnight.”

Although he would like to have fun with his friends, the boy expressed that he helps his father as he is concerned about him. He added that he understands the difficulty that his father faces as a single parent and does not want his father to have to tolerate the work alone.

“There is an old saying that ‘There is no sweet without sweat.’ And no matter how tired I am, my dad must be much more tired than me,” the boy said.

The father plans on sending his son to Songshan Shaolin Temple to learn dance. The boy expressed that he hopes to become a firefighter in the future.

“His maturity doesn’t match his age,” one user commented.

“The 11-year-old speaks and thinks more maturely than some adults. Hope he can have a perfect and comfortable life in the future,” another user wrote.

The video has garnered over 2.2 million views and 48,900 likes since being uploaded.

More from NextShark: China plans to conduct asteroid defense system test that can blow space rocks out of orbit by 2025